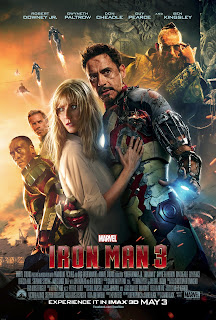 Given the choice, I would definitely rather be Tony Stark than Bruce Wayne...

So, it's finally here.  The conclusion to the first Iron Man trilogy, and the beginning of Marvel: Phase 2.  Right off, I can tell you that Iron Man 3 is definitely a step up from Iron Man 2, so if you're like me and was disappointed in IM2 (and thought it suffered from sequelitis), then you're going to enjoy IM3 a whole lot more.

Iron Man 3 is loosely based on the "Extremis" story arc from the Iron Man comics.  I can't claim I'm super well versed in the Iron Man comics, so I can't comment on how faithful it is to them.  I am a little more familiar with the Mandarin though, so I was initially a little concerned about his choice as the main villain for IM3 and casting Sir Ben Kingsley to play him.  I'm a huge fan of Kingsley, so it's not an issue of ability, but in the comics, the Mandarin was of Chinese descent, where Kingsley isn't to my knowledge.  I just didn't think the character was going to translate particularly well on screen.  Comic book purists may be a little upset with how his arc plays out, but I think that that not only did Kingsley do a great job, they actually did a pretty clever twist the character that made it work.  This is one instance where I don't mind that the movie took some liberty with a known comic character.

In the film, the Mandarin is a terrorist that has the world on edge with a series of bombings and menacing threats.  Little is known about him, or where he even is.  Tony Stark (Robert Downey Jr.), on the other hand, isn't too concerned with this yet.  He's been dealing with severe anxiety issues since the events of The Avengers, and can barely sleep.  The only way he can deal with everything is to constantly tinker and build more Iron Man suits.  He's still with Pepper Potts (Gwyneth Paltrow), who's continuing to run Stark Industries.  Some old associates, Aldrich Killian (Guy Pearce) and Maya Hansen (Rebecca Hall), approach Stark Industries about working with them on their Extremis project, an experimental treatment that has a variety of uses.  Meanwhile, Rhodey (Don Cheadle) has been rebranded as Iron Patriot (complete with new paint job) and is tasked with finding the Mandarin.  However, when the Mandarin finally hits Stark close to home, Stark threatens revenge on the Mandarin.

There are issues I had here and there, but in the interest of keeping things spoiler-free, I'll hold back on any specific criticism.  A friend and I were discussing IM3 right after seeing it, and we both felt that many of our complaints were nitpicks.  I think you'll understand what I'm talking about when you see the film.  I'll just say this, if I can accept the premise that a super-genius is flying around in a self-made, robotic suit, with a glowing power source implanted in his chest, then I can accept some of the things that bothered me a little in IM3.  They even made a joke about this in the film saying something along the lines of 'everything changed once the big guy with the hammer landed.'  So yeah, in a universe that has Hulk and Thor, I can look past some stuff.  It's the whole Flying Snowman thing.

The one complaint I can talk about is the ending.  Don't get me wrong, it's action packed and a blast to watch for sure, but there's such an orgy of Iron Man suits that at times you really can't tell who is fighting whom.  There's just a little too much going on, but this is just the kind of stuff that will likely get multiple viewings out of fans, and people breaking down these scenes in slow motion in order to catch everything.  I'll admit that I'm going to be one of these people.  Do you see what I'm saying about the complaint being a bit of a nitpick?  I'm complaining that that super entertaining and explosive conclusion had too much going on.

There are several entertaining action scenes in the film, and despite being over two hours, the film is briskly paced and there's never a dull moment.

As you'd hope, the effects are great!  I love these small, independent films that do what they can with a modest budget.  I saw this on IMAX 3D, and maybe I sat too close to the screen, but I could barely even tell the film was in 3D.  It's still worth seeing in a premium format for the overall look of the film and the sound, but I didn't anything out of the 3D.

Besides the action sequences, another strength is the humor.  As I hoped with bringing in Shane Black, his pairing with RDJ would net us some great, Lethal Weapon-like dialog, and that's exactly what we got.  It's a little mean-spirited at times, but that's part of Tony Stark's character.  It's definitely a contrast from Iron Man 2, where I felt everyone was just smarmy and snarky.  This time it's pretty much contained to Stark, and the overall level of the dialog in an improvement across the board.  Shane Black, along with co-writer Drew Pearce, really know how to write snappy, witty dialog, and Black knows how to get the best out of everyone.  There honestly isn't a weak link in the entire cast, and the chemistry is great with everyone.

Robert Downey Jr. was great as Tony Stark again.  Back when originally cast for Iron Man, I thought it was a perfect casting based on his life experiences.  It's a little interesting to note that he worked with Black on Kiss Kiss Bang Bang, which many feel was the movie that really got RDJ back on the path to superstardom (check KKBB out if you haven't seen it).  RDJs contract is up with IM3, so I don't know if this is the last for him and Iron Man, but I really hope it's not.  I've heard RDJ is willing to extend his contract and said he has a few more in him, so hopefully they can keep this going for at least another Avengers and IM flick.  If something doesn't happen though, then at least he's going out on a high note.

Iron Man 3 is a great addition to the Iron Man franchise and picks up from the high note left off by The Avengers.  There are lots of great action scenes, and funny dialog, so whether you're a fan of Iron Man, Robert Downey Jr., or just Summer blockbusters, then you're sure to be entertained.  Don't miss this one, true believers!