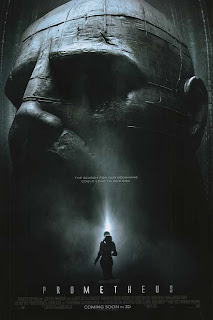 When are humans going to learn that if you're going to explore outer space, then you should bring an army along just in case?

I was talking to a friend the other day when he questioned what all the hype was about Prometheus, and I said, "It's return of Ridley Scott to the Alien franchise and it has a sick cast.  What's not to like!"  After seeing Prometheus, I'm afraid my friend was right about the hype.  It's not that Prometheus is a bad movie, but I think it's an example of what happens when everyone's expectations are set too high.

While I'm going to try to stay away from spoilers, I am going to start this one off on a bit of a rant.  The problem is this: nearly the entire story, including the climax, is spoiled in the trailers.  This has to stop!  You can watch the 2-3 minute trailers online and you've pretty much seen the entire plot of Prometheus.  Granted, lots of movies do this, but so much of this movie is telegraphed by the trailer that there's little suspense to anything that happens.

The setup for Prometheus starts with two scientists, Elizabeth Shaw (Noomi Rapace) and Charlie Holloway (Logan Marshall-Green), who find an old cave painting that has a set of markings that matches the same set found in paintings from many unrelated civilizations.  They determine these markings are a star cluster, which they analyze and find that there is a planet they suspect that can support life.

Weyland Industries funds an expedition to the planet to see what they find and maybe get some answers to the origins of life on Earth.  While in transit, you're introduced to David (Michael Fassbender), an android, which is clear by the very fact that he's not in cryo-sleep like everyone else.  Plus, they introduce him to the crew as an android the first chance they get.  This felt odd to me as in Alien the reveal of the android was a surprise to the crew.  David is easily the most interesting character in the movie and Fassbender does a great job with the role.  From the very beginning, you're already curious about what's going on in that computer brain of his.

They arrive at the planet and find ancient buildings and remains that are thousands of years old.  Something bad happened there, but they don't know what yet.  Just as they start to explore, another pet peeve of mine happens.  Why is it always the role of the 'egghead'-scientist character to not want weapons on the mission?  As a smart person, don't you understand that when going into an unknown, it's probably not a bad idea to be prepared for all contingencies?  Of course, they don't take weapons and then later there's always a need for them.  It bugged me a little more this time around, because you don't know what you're going to run into on an alien world.

There's a whole lot of 'what is that?' and 'who are they?' in the movie.  One of the strengths of Prometheus is that this did feel like a true sci-fi film.  The setup and early part of the movie really had me.  When they talk about the Engineers (the famous Space Jockey from the first Alien) and life on Earth, you're genuinely interested in seeing how it all plays out.  What are they going to discover?

However, once the more action/horror elements start, I started to lose interest, as those earlier sci-fi aspects of the film fell by the wayside.  That's the main problem.  Prometheus sets up all these questions and then doesn't answer very many of them.  I left Prometheus still knowing very little about the back story of this universe.  They do setup a sequel, and I actually hope it gets made because maybe that will answer many of the questions left unanswered.

The ironic thing is that there was a line in the movie about being disappointed when meeting your creator and finding out 'why'.  That's how I think a lot are going to feel about this movie: disappointed.

Prometheus does have a great cast, but the characters aren't developed very well and it seems like a waste, as their talents are underused.  For the second straight week, Charlize Theron stars as a bad guy, but this time around it's more of a muted performance where there is doubt about what her true motivations are.  This could have been a more interesting character, but they didn't develop her.  Tom Hardy-lookalike, Logan Marshall-Green, plays his character with a unusually abrasive attitude, especially towards Fassbender's David.  It's never a good idea to be needlessly mean to the outwardly nice, but morally ambiguous android, right?  That won't turn out bad for him at all.

The story focuses on Noomi Rapace's Shaw and I thought she did a good job.  While the comparisons to Sigourney Weaver's Ripley are natural, she doesn't demonstrate the same strength or toughness as Ripley.  Shaw is a scientist, where Ripley seems like a natural leader from the very beginning.  Idris Elba seemed like the only character that had any real personality, but he's not in it that much or given much to do.  I didn't even realize Guy Pearce was in this, as they put him some really awful old man makeup.  I don't understand why they did this, rather than just cast an older actor.  I like Pearce, but he didn't bring anything to the role that made you think only he could have played it.  Fassbender comes out if this looking the best.

The script by Jon Spaihts and Damon Lindelof doesn't develop the story elements it sets up or gives you enough to care about the characters or make them all that interesting.  If you're a Lost fan, as I am, the disappointing payoff may not be a surprise to you considering Lindelof's involvement.  There were just too many thing in the story that didn't add up to me.

I'm glad Ridley Scott is back to the Alien universe he introduced us to back in the 70's.  He really did get the sci-fi aspects down and the movie's visual style is fantastic.  It is a gorgeous movie to look at.  The visuals alone are almost worth the price of admission.  I did see it in IMAX, which helped, but I didn't think the 3D did much for it.

There's been a lot of discussion about whether or not this is an Alien prequel or just set in the same universe.  It's definitely not a direct prequel to Alien.  I'd call it Alien's uncle.  I think it's better to go into this as a standalone film.  I tried to do that, but still felt it lacking.  However, there's a tacked on ending that kind of undercuts their assertion that this isn't another Alien film.

In the end, Prometheus has a lot of interesting ideas that aren't fully realized.  It's a visually stunning movie and has a few interesting performances, especially from Michael Fassbender, but it ultimately left me disappointed and a little cold.  Maybe on a second viewing once it hits Blu-Ray I might get more out of it.  If you're dying to see this, do a matinee and skip the 3D.  Otherwise, it's a rental.