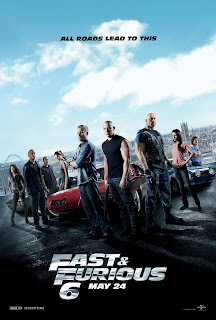 I complained in my The Hangover Part III review that The Hangover franchise was a good movie where they forced two sequels of descending quality, because they didn't know where to take the characters or the story.  The Fast & Furious franchise seemed to be following a similar path of each sequel being worse than the original, but at some point after the fourth, it's as if they all sat down and said, "You know what?  Let's just make these movies as over-the-top as we can!"  It seems to have worked as many consider Fast Five to be the most entertaining of the series, and now we have Fast & Furious 6, which continues the trend.

This is one of those testosterone-fueled action films that just gets your adrenaline going.  I left the theater well after 1 a.m. and all I wanted to do was go lift weights and drive my car home really fast, and I drive an old Honda.

The plot is pretty ridiculous, but this isn't a movie you're watching for it's nuanced and solid plot.  Even the film seems to be saying, "Whatever, just go with it."  An ex-British Special Forces soldier Owen Shaw (Luke Evans) has committed a series of heists and the DSS needs help catching him.  Agent Hobbs (Dwayne Johnson) works a deal with Dominic Toretto (Vin Diesel) and his crew.  Help him bring Shaw in, and it's full pardons for the team.  To stir the pot even more, Hobbs reveals that Letty (Michelle Rodriguez), who's been presumed dead (since Fast 4), is working with Shaw.  Dom's in no matter what now, as he just wants to find out what happened to Letty.

From that point, it is just an orgy of car chases and fighting.  Almost all of it is ridiculous, and the rational side of your brain can't help but watch some of these sequences and wonder how they are always escaping serious bodily harm, or even death, with each crash or bone-crushing hit.  Then again, it just so fun to watch that you really don't care that much of it doesn't obey the laws of physics.  Some of the scenes are so crazy that it becomes cartoonish.  Cars get flattened, yet there's no blood or bodies even though you didn't see anyone get out of the car.  You can actually tell what's going on in these scenes though.  They actually trusted that their action sequences would entertain without having to distract the audience with weird camera movements, quick cuts or shaky cam.  My eyes were so glued to the screen during some of these scenes that they would keep drying out (I'm a contacts wearer) from lack of blinking, and I would always look for an opportunity to put eye drops in.

Another thing that impressed me was that the film managed to avoid looking fake despite the craziness of some of the action scenes.  I don't know how much CG was used, but it sure seemed like a lot of it was practical.  In some ways this felt very old-school.  Even most of the cars used were older, muscle cars.

There are a few lulls here and there, mainly when there's any kind of dialog or exposition in between action scenes.  However, much of this is made bearable by the surprisingly humorous dialog.  There's good chemistry within the group, and you get that feeling that these guys are really friends just ripping on each other.

Overall, I really enjoyed the cast.  This is a group not exactly known for their acting chops, but for the type of film Fast & Furious 6 is, there's nothing wrong with them, and they all looked like they were having fun.  I have to give special notice to Gina Carano, who plays Hobbs partner, and has many of the best fighting scenes in the film.  I think at this point any film that features women fighting must star Gina Carano.  This should be enacted into law.  Also, I could have used a little more Dwayne Johnson.  He only pops up from time to time, but maybe they had to limit his time on film when they'd run out of baby oil or arm butter.  Jeez he's a beast of a man!

Director Justin Lin and writer Chris Morgan, who've been collaborating on the series since Tokyo Drift, really seemed to have hit their stride with the series, and turned it into something that is simple, audience- pleasing, Summer fun.  They even managed to tie up the continuity with Tokyo Drift really well (note: for those that aren't aware, despite Tokyo Drift being the third film in the series, chronologically it takes place after Fast Six).

Oh, and there's a really great surprise as the credits roll.  You don't need to stay at the very end, but there's a scene during the credits that might be one of the best sequel teases I've ever seen.

If you want some crazy, balls-to-the-wall action and don't want to have to think too much, Fast & Furious 6 is for you.  It's not going to win any Oscars, and sure it's a little dumb, but it's the type of film that fits in just fine during the Summer blockbuster season.  It really does have a little bit of everything for action lovers and I think it's a fun way to spend a few hours.  I thought it was a blast to watch, and definitely worth a matinee.