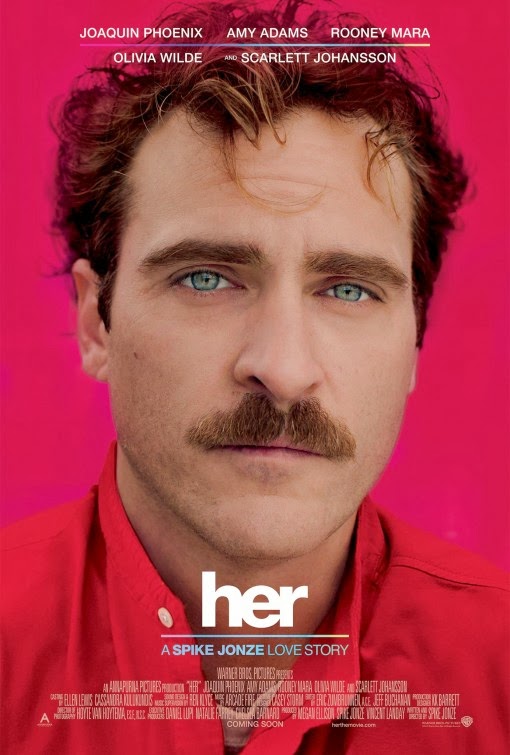 Do you like hearing people have awkward phone sex?  How about stories showing people falling in love with inanimate objects?  Do you like movies set in the future, yet everyone dresses like 1970's grandparents?  Well then Her is the movie for you!

Clearly I'm oversimplifying when talking about Her, as it's anything but a simple movie.  Her is one of those unusual films that oscillates from being brilliant to just plain weird.  This probably shouldn't come as a surprise to people familiar with writer/director Spike Jonze previous work, especially where Charlie Kaufman was involved.

Her is about Theodore Twombly (Joaquin Phoenix), who is currently going through a divorce with Catherine (Rooney Mara).  They had a long, loving relationship, but drifted apart and Theodore's having trouble letting go.  He buys a new, artificially intelligent operating system, mainly to help organize his life.  The OS introduces itself as Samantha (voiced by Scarlett Johansson), and explains how she's designed to grow and evolve.  As Samantha learns more about the world, they continue to bond and eventually develop an emotional relationship.

Based on the premise of the film, I was worried this was going to be another Lars and the Real Girl, which might as well been called "Entire Town Indulges a Sad Man with Mental Health Issues."  Fortunately, Theodore is more grounded than that.  He's actually a fairly normal guy, just a little introverted.  I still had a bit of an issue with someone falling in love with an AI, but after I thought about it for a bit, is it really all that different from a long distance or exclusively online relationship?  I've watched people have relationships where all the interaction was over the phone or at opposite ends of a keyboard.  Either way there's no physical intimacy.  Is that a requirement for love?  Who's to say that's not the direction we're headed.  Followers of my blog are probably aware of my dislike for online dating.  I share a similar dislike for long distance relationships.  I feel like some of the time it's a way of having an easy relationship where there's not as much at stake.  If things get too difficult, you can just end it without much complication.  This is actually a point brought up during the film, so I appreciated the fact they took this on.

Another interesting point Her made was how all of this technology is actually making us less connected.  In many scenes of the film, you see people walking around, talking into their PDA/phone devices, not even looking up at people immediately around them.  We see this all the time now where people stare into their phones, so zoned out that they bump into people, trip over stuff, or worse.  Recently, I was a bar and noticed that every single person sitting in the bar area was looking into their phone rather than interact with anyone around them.  Don't get me wrong, I've been guilty of this, but it's one of the reasons why I'm trying to move away from stuff like Facebook and Twitter.  It's great to be able to connect with people that live far away or you wouldn't have access to otherwise, but I think our future will be much better off if everyone steps away from their computers, puts down their phones, and works on interacting with those around them a little more.

There were a few little things I found distracting.  One of which was whatever Theodore's job was.  He's some kind of letter writing surrogate, but I never got exactly what he did or what the purpose was.  I didn't feel it was explained all that well, and normally I wouldn't have paid it any mind, but since there are a lot of scenes of him at work and interacting with co-workers (mainly Chris Pratt), it bugged me a bit that it wasn't clear.  Another thing that was too cute was the overall look of the film.  It's very 60's/70's styled with lots of reds and oranges.  People wore awful shirts, had unkempt hairstyles, and had those old man pants with the waistline just below their chest.  They even managed to make Amy Adams look frumpy, but not Olivia Wilde (could anything though?).  It was like hipsters take over in the future, which may be the most terrifying aspect of Her.  Lastly, at just over two hours, the film could have been tightened up a bit.  There were a few scenes that went on too long where the point had been made.  On the other hand, they play hilariously unusual video games and I wish I could have seen more of that.

Joaquin Phoenix was wonderfully nuanced.  As I mentioned earlier, you might want to write Theodore off as a weirdo, and he is kind of a dork, but Phoenix makes him sweet and very sympathetic.  He's searching for the same things we all are.  However, he blows it on a real date with Olivia Wilde's character when she was clearly into him, and that's unforgivable.  I was impressed with Scarlett Johansson's voice work, which had very cute sexiness about it.  I also enjoyed Amy Adams, but I wish she would have been in it more considering she was one of the few real-world friends Theodore had and they had previously dated.  I could have used a little more Rooney Mara, but I think that's due to the fact that I wanted to learn more about their relationship and why it failed.

Her is a smart, thought-provoking film that brings up some interesting ideas regarding love, intimacy and general interaction with people.  I can understand how it might be too strange for some, but I think if you give it a chance and go in with an open mind, you'll find yourself thinking about the film for long after.