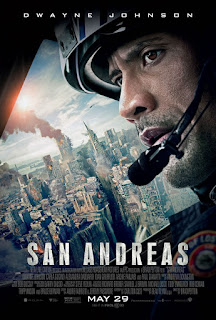 Fortunately, it doesn't waste much time with setup or character backstory. Sure, it's there, but San Andreas isn't about that, and I'm glad it didn't focus on that too much. It helped that it does have a great cast that seemed committed, despite the ridiculousness of it all. I saw an unexpected emotional range from The Rock. He's really trying, at least, and he's an easy guy to root for. My only complaint about his performance is that he didn't try to punch the ground in an attempt to stop the quake. That's what the Hulk would've done anyway.

As with most of these disaster movies, there are a few too many moments of amazing coincidence. How are the main characters always so fortunate to avoid getting crushed or killed? How do they always luck out and find each other just at the right moment? There's also the typical asshole character that the quake manages to provide comeuppance.

There were a few times the effects looked a little sloppy and unfinished, but for the most part it all looked pretty great. For as much destruction as there was, I'm surprised it looked as good as it did. Whatever the budget was, it clearly went all to the effects.

The pacing is great and I never once felt bored or checked my phone to see how much time was left. That alone is a good thing. I have to admit that I found it thrilling. You're not really given much time to think about it, as you're assaulted by the visuals.