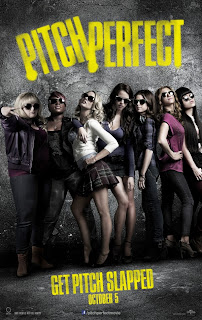 Who knew the world of a cappella singing was so competitive?  It would have been great to find out there was a seedy underbelly to this scene with back door deals, performance enhancing drug use, and betting on competitions.  I also didn't realize how many different spellings for a cappella there are.  Do a search and you'll see a capella, a cappella, acapella, acappella.  All seem to be acceptable.  Can someone make a definitive ruling on this?

First off, I have to confess that I really don't like Glee, and I'm not the biggest fan of karaoke.  Fortunately, Pitch Perfect has more in common with movies like Bring it On, than it does to Glee.

I normally warn about spoilers, and that applies here, but the main knock I have against Pitch Perfect is that it follows the same, extremely predictable formula you've seen a billion times before.  It's kind of hard to truly spoil the film, because you know exactly how it's going to turn out.  You can apply the formula to almost any teen/school/competition film.  The formula is:


It's kind of ironic that it follows such a predictable format, as about halfway through a character states that she never finishes movies, because she gets bored and the endings are predictable.  I thought that maybe, just maybe, Pitch Perfect might do something really creative and have this killer ending that sets it apart.  Unfortunately, this didn't happen.

The outsider, Beca, is played by Anna Kendrick. You know she's a rebel, because she has tattoos and wants to be a DJ instead of going to school.  It's still kind of a tough sell with Anna Kendrick as she has the whitest and straightest teeth in the world, and she's just too damn cute to see her as an outsider.  It's interesting that Beca was difficult to root for at first.  Her goal in life is to drop out of college, even though she's going for free, so she can move to LA to become a famous DJ.  She's standoffish with just about everyone and pushes people away.  She fights with her Dad, who actually seemed like a fairly reasonable person, rather than some overbearing parent stereotype   He even makes a deal with her that he'll help her move to LA if she promises to give college a shot for a year.  Having said that, you eventually do come around to liking Beca, and I think that's due to the inherent appeal of Anna Kendrick.  She's just one of those actresses that's impossible not to like, but I would like to see her try something against type at some point.  I'm not sure if the actresses did all the singing in the movie, but if so, Kendrick has a nice voice and showed some talent beyond her acting chops.

The Bellas, an all female group, are recruiting new signers after a famous flame-out in a previous competition.  It doesn't seem that many people are interested in trying out, so they are basically stuck with a motley group of girls.  Again, it's a little cliched as they all have common sterotypes you've seen: the fat one, the sexpot, the lesbian, the super quiet one.  Even though they are tired cliches, they are at least likable characters and show some personality.

The Bellas primary competition are the Treble Makers, an all male group, led by a chewing-up-the-scenery Adam DeVine.  As they are The Bellas sworn enemy, romancing between the groups is forbidden by Aubrey (Anna Camp), the leader of The Bellas.  You know that forbidden romance will come into play later.  I enjoyed Anna Camp (from Season Two of True Blood) in the role.  She has a stubbornness that intimidates the rest of the group, even when they all know she's wrong.

The funny dialog and charming cast is what saves the movie from it's predictability.  It's consistenly funny, and they still manage to take some shots at the genre and have some fun with it.  Pitch Perfect is campy and doesn't take itself too seriously.  I even got a bit of a Clueless vibe from the movie, but that might have been because Donald Faison has a brief cameo (along with Joe Lo Truglio).  The script by Kay Cannon is snappy and witty, and it also reminded me of movies like Heathers or Mean Girls.  It's interesting to note that Cannon writes for 30 Rock, which is also written by Tina Fey, who wrote Mean Girls.

Rebel Wilson really shines as "Fat Amy".  She steals nearly every scene she's in and looked like she was having a blast.  She isn't made fun of for cheap laughs, and her character actually preempts attempts to make fun of her weight, so it ends up being a stronger character.  Another highlight of the film are John Michael Higgins and Elizabeth Banks (who also produced) as the commentators for the a cappella competitions  It's a little reminiscent of Fred Willard from Best in Show, but they have some great banter between them.  Hana Mae Lee also has her moments as Lilly, a girl who speaks with a voice so soft that you have to be standing inches from her to hear, but you'd be shocked at the stuff that comes out of her mouth.  The entire cast comes off well, without any real weak link.

The singing itself wasn't bad either.  I appreciate a cappella a little more than karaoke, as there's at least some arrangement of the music and choreography that goes into it.  I was worried that were just going to get a bunch of bad remixes of tired songs, but some of it was catchy.  Pitch Perfect was based on a novel by Mickey Rapkin, who spent time following competitive a cappella competitions.  A few people from the a cappella community were brought in to assist with the song arrangements, so I think that helped with the authenticity.

Pitch Perfect was director Jason Moore's first feature and he did a good job with balancing the cast and keeping the pace of the movie consistent with it's almost two hour runtime.  I'd like to see Moore and Kay Cannon collaborate again on another teen/college comedy and mix things up a bit more next time.  It's a good first effort by both, but just a tad too formulaic.

I was actually dreading watching Pitch Perfect, but I ended up having some fun with it due to it's strong cast, entertaining performances, and smart dialog.  It's a light, but predictable, comedy that doesn't take itself too seriously and should appeal to a wide audience.  Give it a shot.