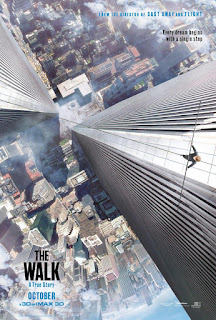 Do you ever get that weird feeling that goes right down to your bones when looking down at heights? It doesn't even matter if it's a picture or a video game, it's some automatic thing that you're just wired with. If you get that feeling, then be warned that a good 40 minutes of The Walk will do that to you.

The Walk is an interesting story about a real event, but it's unusually, and sometimes unnecessarily narrated by Joseph Gordon-Levitt, playing Philippe Petit, the man that actually walked a tightrope between the Twin Towers. It constantly breaks up the story and is an example of the movie telling you rather than showing you. This is especially unusual since The Walk hangs so much on the visual aspect of it. It's also a little weird to see so much narration to a story that's already has an Oscar winning documentary about it. If you want to know how Petit really felt about his walk, just watch Man on Wire on Netflix. It kind of makes the whole movie feel like overkill, only existing to show you how good the CG is.

The cast is good though, and I enjoyed Joseph Gordon-Levitt's performance. I didn't even find his accent annoying, and after a while I forgot I was watching JGL. He's done a pretty good job of doing roles that are different from film to film, rather than playing the same character over and over. The characters take a backseat to the real star of the film, the computer generated Twin Towers. It's done so well and they are shot so lovingly that much of The Walk feels like a tribute to them. Even the way Petit speaks about them seems like he's in love with them.

The final act of The Walk is what you're really waiting for, and it's a doozy. The effects and cinematography are both excellent. It's one of the few times where seeing something in IMAX 3D really felt worth it, as it adds that extra depth to the experience.

I found this to be an interesting contrast to what I saw in Everest. In Everest, I didn't have much sympathy for the characters, and thought what they were doing was nuts. I also thought Petit was nuts, but super ballsy, and oddly poetic. Perhaps it's because Petit considered himself an artist, and I connected with that on some level.

The Walk is a mixed bag of uneven drama, but great, thrilling visuals. I do think it's worth seeing on IMAX if available to you though. Also, if you haven't seen it yet, I'd really recommend you watch Man on Wire, which is a really great documentary about the real event.