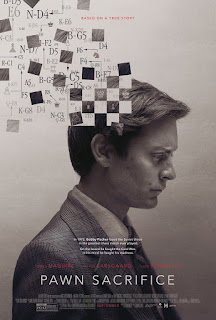 Let's see what we have here. A movie about a guy with deep mental health issues, who's also a master at a game I've never been particularly interested in, or even played (honestly, I think I've played chess once in my life). Sounds perfect, right? Also, and maybe this is just me, or hasn't there already been a good amount of movies about Bobby Fisher? Well, fortunately Pawn Sacrifice a movie that's still interesting enough even if you know nothing about Bobby Fischer or chess.

As far as biopics go, it's pretty standard as far as how it's setup and plays out in the beginning. You get some glimpses of the man Fischer is going to become and the issues facing him, Where is gets interesting is once we advance a few years to where he's an adult trying to become the best chess player in the world. You get a view of a very disturbed man dealing with worsening mental health. An interesting thing they hint at, but don't dive into enough for my liking, is whether or his disturbed mind is what made him so great at chess, or does trying to master the game slowly drive you mad. Does it simply attract that type of person?

It's also a little frustrating to watch as his paranoia makes him harder to deal with and pin down. His friends try their best, but there's only so much they can do. Pawn Sacrifice also plays up the US vs. the Soviets at the height of the Cold War. It seems as if they weren't sure what kind of movie they wanted to make, so they just threw a little bit of everything in there. The film could have used some focus. Oddly enough, they spend almost no time at all explaining the game or the rules of these chess tournaments, but I get the feeling that's probably a good thing.

Tobey Maguire was pretty great. It may be his finest performance to date. I honestly can't thing of anything he's been better in. I also enjoyed Peter Sarsgaard and Michael Stuhlbarg as part of Fischer's team, watching how they take different ways of dealing with Fischer, while playing off of each other. My only real disappointment is that Liev Schreiber didn't have a more prominent role. More Ray Donovan is always a good thing. I thought he nailed a Russian accent though.

Pawn Sacrifice is a well-made, well-acted film that doesn't tread any new ground as far as biopics go. While there are some interesting ideas and threads, it suffers from too many of them, and ultimately plays it safe with all of them. Not bad, but nothing you need to rush out and see.