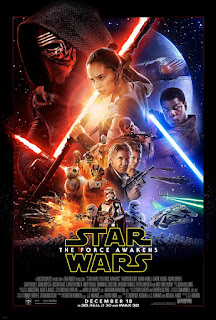 Non-Spoiler review. I'm gonna do a more spoilery review in a few days.

Okay, lets get this out of the way. I've already seen it more than once, and I loved it more the second time. Granted, it's probably still only the the third best Star Wars film, but that's not a bad thing. It kills all of the prequels (there were prequels?) by a long shot. The Force Awakens might as well been called "The Faith Restored". Thank you JJ Abrams for being the Star Wars fan I thought you were.

I've heard this is a Star Wars movie that can be seen by someone that's never seen a Star War before and still enjoy it, and that's definitely true. The Force Awakens has a short learning curve.

I'll get the bad out of the way first. The main issue I had with the film is that it recycles a lot of plot points from previous Star Wars films, but I look at that as if you're gonna try to restore faith and recapture a lost audience, might as well start from a safe place. Even with the basic Star Wars plot, it leaves a lot of questions open where you can see potential places where the sequels may go. It's not completely obvious where the next films will go. My only other real disappointment in the film is that the score wasn't all that remarkable. It has the old Star Wars musical cues we all know, but I didn't hear anything new that blew me away.

On to the light side. The new characters are fantastic! I wasn't sure how the new guys would play, but they totally carry the movie and you care about each of them. They succeed in bringing a new generation of fans to the franchise. Finn is a great, funny, original character. Rey is the new, upgraded Leia for the next generation. Poe wasn't in the movie all that much, but he just became the Star Wars character I'd most like to have a beer with. Kylo Ren plays the intimidating, conflicted villain that the series needs. I can't wait to see what they all do in the rest of the series.

The action is great and the film is shot beautifully. If you're worried about JJ Abrams lense-flare, then worry not. It's non-existent. There's a lot of creative and interesting shots that we've never seen in a Star Wars movie before. None of the long, walking exposition shots to be found here, nor any of the shot/reverse-shot style of dialog. The film is paced beautifully. I don't think I took a breath the first 30 minutes of the movie either time I saw it.

It's easily the funniest Star Wars film as well. JJ Abrams nails the humor and character interaction. The dialog is a vast improvement over anything the the prequels. The stunted dialog and robotic behavior is completely gone! It's an emotional film, too! I got choked up a few times the first time I saw it, but even more so the second time when seeing my nephews react to it. This is the nostalgia I needed.

Star Wars: The Force Awakens is the Star Wars movie you're looking for. While derivative, it delivers the fun, action and humor fans craved. It successfully restores faith in the franchise, and gives it the kick in the pants it needed. This is fun for the whole family!