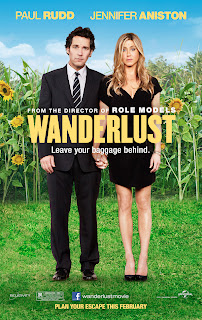 I remember a few months back I did a Nielsen survey for a movie called "Shiny, Happy, People".  The survey involved being shown a trailer and then asked me how I felt about it.  As you might have guessed, the trailer featured the R.E.M. song of the same name.  When we got to how I felt about the movie, I said that I liked the cast, but that it looked cheesy and that I wasn't all that interested in seeing it.  I also added that I didn't care for the name of the movie and use of the R.E.M. song (I've always hated that song!).

About a month or two later, I saw a different trailer for a movie called Wanderlust and got a laugh when I realized it was just a recut version of the trailer for "Shiny, Happy, People".  They even removed the R.E.M. song.  The weird part was that now that the name was changed and song was gone, I suddenly felt like watching the movie more.  It just kind of goes to show you how a movie is marketed can really change how you feel about it.  Oh, I've just been informed by a friend that "Wanderlust" is also an R.E.M. song.  Someone really likes R.E.M.

Wanderlust is defined as a strong desire or impulse to wander or travel the world, but that's actually not what this movie is about, so the irony is that the original title of "Shiny, Happy, People" would have fit a little better.  Anyway...I'm getting way the hell off topic.  Lets actually talk about the friggin movie.

Wanderlust is about George (Paul Rudd) and Linda (Jennifer Aniston), a couple living in New York.  In what may feel all too familiar for many, they recently purchased an undersized apartment that they can barely afford.  Unfortunately, their timing couldn't be worse, as shortly after moving in George loses his job and Linda's current project also fails.  They have to dump their apartment and move to Atlanta where George's brother (played by a hilarious Ken Marino) runs a business.

On their way to Atlanta, they make a quick stop at the Elysium bed and breakfast, where they are greeted by a nudist (Joe Lo Truglio).  Freaked out by the sight of his fake penis, they try to leave, but in their haste, flip their car over and are forced to stay overnight.  Despite their initial reservations about staying there, they meet a lot of interesting people and end up having a good time.  They find the the bed and breakfast is more of a commune than just a standard B & B.  Once they make it to Atlanta, they quickly find that they are unable to deal with George's abrasive brother and alcoholic wife (Michaela Watkins) and decide to go back to Elysium and give living there a try.  Who needs a job and money, right?  It's all about being happy.

That's pretty much all you need to know about the story.  It really comes down to the comedy, which I ended up thinking was pretty funny.  Don't get me wrong, there are some jokes they overuse and some eye-rolling moments, but I thought overall it worked.  I like a raunchy comedy though, so if you're not the type of person that likes sex and drug jokes, or nudity used for comedic effect, then this probably isn't for you.  If you do like those kinds of things in your comedy, then I think you'll dig this.

I actually wasn't sure I was going to like it after the first 10 minutes or so, as it took a bit to get going.  It helps when a movie features a likable cast and I think I gave it chance because of that.  I also think I might have been a little more forgiving of certain elements because of the people involved.  Once I warmed up to it, I just enjoyed it for what it was.  I know I have a tendency to over-analyze movies or be hypercritical, so it was a nice change to have a movie that I didn't have to think about too much and just laugh.

The cast is great.  Paul Rudd is, well, Paul Rudd.  Who doesn't like Paul Rudd?  Just about the only thing wrong with Jennifer Aniston's performance is that her nudity is blurred when it happens.  On another note, is it just me or is she getting hotter as she gets older?  As for the rest of the cast, if you've spent any amount of time watching cable, then you're likely to recognize many of the people in the movie.  You'll see people from shows like The State, Stella, Reno 911, Childrens Hospital, Key and Peele and various stand-up specials.  Everyone in the cast seems to have a line or two that gets a laugh.  It's difficult to single everyone out but I thought Todd Barry, Kerri Kenney, Justin Theroux, Alan Alda and Lauren Ambrose all had their moments.  Justin Theroux (Aniston's current boyfriend) as the leader of the Elysium commune really shined.

Despite my own reservations about seeing the movie, if they had told me up front that this was from the makers of Role Models (which also starred Paul Rudd) and produced by Judd Apatow, then I would have been on board from the beginning.  I loved Role Models, so that alone would have sold me.  Wanderlust was directed and co-written by David Wain (The State, Stella, Childrens Hospital) and also co-written by Ken Marino (also from The State and Childrens Hospital).  I hope these guys keep doing more movies as I really think they are all funny.

Oh and there's a blooper reel during the credits, so you'll probably want to hang out through them if you liked the film.

Whether you're simply a fan of Paul Rudd or Jennifer Aniston, liked Role Models, or just like raunchy comedy, there's a lot to like about Wanderlust.  It's not as strong as other Apatow offerings or as funny as other recent comedies of this type, but I thought it hit more that it missed.  It has a talented cast and it made me laugh a bunch.  I recommend grabbing a friend or two and checking it out.  I think it's a worthy matinee.