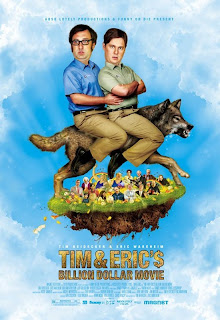 I have to admit that I'm really not all that familiar with Tim and Eric.  I've never seen their show on Adult Swim and have only seen a handful of clips on YouTube (the Steve Brule stuff with John C. Reilly is hilarious).  Having said that, I really don't have an opinion of these guys one way or another, so I went into Tim and Eric's Billion Dollar Movie with an open mind.

Having said that, Tim and Eric's Billion Dollar Movie is just plain terrible.  Normally, I don't have problems spoiling bad movies by bringing up major plot points, but with this movie there's nothing to spoil, especially anything particularly funny.  I have a feeling that if you're a Tim and Eric fan, you're probably not going to like what I'm about to say here and think that I'm just a cranky old man (trust me, I'm getting there).

Basically, it starts with Tim and Eric showing a movie they made where they managed to squander a billion dollars in the process of making it.  The movie is a complete disaster, so the producers (Robert Loggia and William Atherton) want their money back.  Tim and Eric go on the run to avoid these guys and then get a job running a decrepit mall (think worse than the 'dirt mall' from Mallrats).  They are hired by the mall owner (Will Ferrell in just about the only funny part of the movie), who has promised that running the mall will make them a billion dollars.  Sounds hilarious, right?  That's pretty much the whole story.  From that point on it just sets up one bad joke after another.

Do I really need to point out the irony of making a bad movie where main characters are in trouble for making a bad movie.  Life imitating art, eh?  I've been told that Tim and Eric's stuff is intentionally bad.  Well, you can be bad and still be funny.  I don't mind dumb or absurd comedy if it's done well.  If you're a Tim and Eric fan, I don't want to hear any shit about how I didn't get it because I'm not familiar with their other work.  This was actually something that came up when discussing another movie recently.  If you make a movie, unless it's a sequel, it shouldn't require that I've seen other works by the same person in order to get it.  It should stand on it's own, otherwise it's just a shameless cash grab from your existing audience.  That's one of the reasons why the Sex in the City movies are so awful.  Also, I think about the South Park guys.  They've done live action movies that were just as silly, crude and inappropriate, yet tons funnier.  Like I said, it is possible to play dumb or bad and still be funny.

Outside of the Will Ferrell sequence mentioned earlier, this movie got barely an amused 'heh' out of me and those were mainly the times that Tim and Eric broke the fourth wall.  I spent most of the time going 'that's disgusting' or 'that's dumb!'  It just got worse as it wore on.  For example, there's a scene where Eric is sitting in a bathtub while four boys shit on him as some weird form of therapy.  There's a 'sex' scene featuring a blow up doll and many dildos.  Are these the type of antics that are typical Tim and Eric's shtick?  The stuff that has gained them a loyal fan base?  I don't get it.

I feel bad for the people they got to be in this.  You have guys like Jeff Goldblum, Will Forte, Ray Wise, Robert Loggia, and William Atherton in this.  I'll always remember Atherton for being jerks in movies like Die Hard, Real Genius and Ghostbusters.  He's too good for this.  I practically forgot Zack Galifianakis was in the movie.  John C. Reilly is particularly bad here.  I kept waiting for him to show up at Steve Brule, but instead he plays some weird guy named 'Taquito' that just coughs his way through the movie.  It's a shame to see great actors and comedians wasted like this.  The sad part is I really wanted to like the movie when I first heard about it and saw who was going to be in it.  I don't blame the actors; it's what they are given to work with that's bad.

Like many SNL movies, the material seems like sketches that work well in 10-15 minute segments, but don't when stretched into a full-length film.  If this was your first experience with Tim and Eric, I would imagine you'd never want to see them again.  This movie isn't going to get them any new fans.  It feels like a movie made by a bunch of kids that would be really funny to them and their friends, but that people outside of their circle will not find funny.  I think the 13-year-old version of me would have thought it was really funny, but the 38-year-old me did not.

Look, I can keep ranting about this movie, but what's the point?  It clearly wasn't made for me.  It was made for existing fans of Tim and Eric and that's fine.  If you're one of these people, go out and watch it.  I'm sure you'll enjoy it.  For everyone else though, I cannot recommend it on any level.

Oh, and just to show that I don't completely hate these guys.  Here's one of the Tim & Eric clips from YouTube that I have enjoyed.