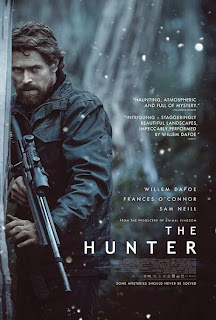 Maybe if this was the Green Goblin hunting a Liger, then this could have been epic!

Willem Dafoe is a hunter hired by a biotech company to find a Tasmanian Tiger, which totally sounds made up, but is actually a real animal believed to be extinct for quite a while.  However, there have been rumors about about recent sightings.  He's supposed to collect samples and organs of this animal, which would presume he's supposed to kill it.  So, you find an extinct species alive and your response is to kill it?  Why?  For cloning?  Why not capture it and take it alive?  It's not really clear why this company wants this tiger so bad, but the clock is ticking.

Dafoe arrives in Tasmania and rooms with a local family.  He has to lie and be vague about why he's there, because other companies and hunters are also after this tiger.  I'm guessing what he was doing was probably illegal as well.  He encounters resistance with the locals, as their primary employment is the logging industry and they think he's part of the environmental groups trying to stop them.

Simply put, not enough happens in The Hunter to keep it truly interesting. You're treated to lots of scenes of Dafoe driving back and forth to the forest and doing handyman tasks around the house.  Even when he's doing more interesting things like tracking and setting traps for the tiger, it's very clinical.  It looks like he really knows what he's doing, but it seems like the type of stuff that only hunting enthusiasts would get anything out of.

The whole movie's setup seemed 'off' to me and I think it's because there were too many things not really explained well.  Then, there's a subplot involving him bonding with these kids he's staying with, their sick mother, and dealing with their missing father, but none of it is developed all that well.   Even when they deal with the conflict between the loggers and the environmentalists, there will be a standoff or argument that goes nowhere. It all fizzles out.

When you finally reach the conclusion, there's actually a good sequence of events, but it took too long to get there. 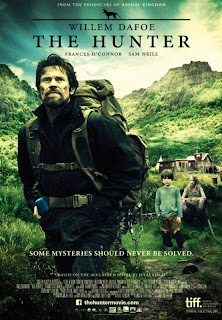 Based on a novel by Julia Leigh (who just wrote and directed Sleeping Beauty), it seems odd she wasn't involved in the screenplay, which was written by Alice Addison and originally adapted by Wain Fimeri.  I know I harp on this a lot, but it seems like too many writers had a hand in this, where it seems like the movie lost it's voice by not just having Leigh involved.  It lacked focus as a result.  Is this movie a thriller?  A drama?  It's not a wilderness survival film, like The Grey.

Nettheim got good performances out of the cast, but they aren't given much to do.  I didn't even recognize Sam Neill or Frances O'Connor.

There's some very nice cinematography and a good performance by Willem Dafoe, who's the anchor of The Hunter, but that's about it.  It's not an awful film, but just kind of boring.  That's really all I have to say about it.  It's a rental.