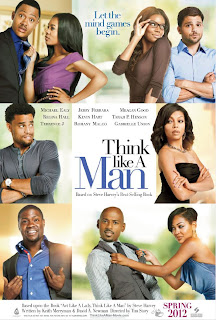 See ladies, if you want to get a man, you have to start thinking more like one.  I've been saying this...like...forever!  Duh!  Think Like a Man is a romantic comedy inspired by the book "Act Like a Lady, Think Like a Man: What Men Really Think About Love, Relationships, Intimacy and Commitment" by Steve Harvey.  Hey Steve, you think you could have maybe shortened that title just a bit?  That's a mouthful!

The movie begins by introducing us to a group of six friends and their 'roles'.  You have Zeke, 'The Player' (Romany Malco); Dominic, 'The Dreamer' (Michael Ealy); Cedric, 'Soon to be Divorced Guy' (Kevin Hart); 'Happily Married Guy' (Gary Owen); 'The Mama's Boy' (Terrence J); and finally Turtle from Entourage as 'The Unable to Commit Guy' (Jerry Ferrara).

You're also introduced to a few women that are likewise broken down to their 'roles', like Mya, 'The 90-Day Rule Girl' (Meagan Good); Lauren, 'The Woman Who is Her Own Man' (Taraji P. Henson); Candace, 'The Single Mother' (Regina Hall); and Kristen, 'The Woman that Wants the Ring' (Gabrielle Union). I'm paraphrasing the roles a bit as I didn't take notes during the movie, but anyway...

The women, looking for a way out of their dating ruts, turn to Steve Harvey's book for advice.  Think Like a Man feels like an updated and more realistic version of He's Just Not That Into You, a book I actually did read.  Rather than just repeating the mantra 'he's just not that into you', Think Like a Man is more about understanding how men think and turning the tables on that to get what you want.  I don't mean that necessarily in a manipulative way or actually becoming more like a man, but just trying to understand why men behave the way the do when dating.

Interspersed through the film you have Harvey chiming in, either in interview form or just speaking to the audience reciting themes or rules from his book.  He talks about things like setting your standards, not giving 'it' up too soon, being respected, keeping your power, etc.  There's actually some good advice in there, that is, if you haven't heard it already.  Some of the stuff he says seems to be common sense.  I haven't read either of his dating books, so I'm not going to go into whether or not they are any good.  However, at times, the movie felt like an extended commercial for his book.  You see many scenes of women frantically rushing to book stores, buying up all the copies, carrying it around everywhere, reading it constantly, etc.  It felt a bit contrived.

Initially, the advice seems to be working for the ladies.  However, things change when the men finally become aware of the book and try to take the power back.  This leads to a lot bad lying and things backfiring on everyone.  It also leads to some of the funnier and more uncomfortable moments in the film.  You know when you catch someone in a lie and they go, 'Huh?  What?  I don't think I said that."  Stuff like that.  Part of the message that comes out of all this is that while you should have certain expectations, nobody is perfect and you can't try to change people too much.

You still have your typical rom-com conventions here and that's my main disappointment about the film.  The way this started, I thought it may end up being more of a shrewd or keen look at modern dating, but ended up being more of a standard romantic comedy, particularly with how it wraps up.  It doesn't really take as many chances as I was hoping.  Think Like a Man is only  PG-13, so it's not raunchy, has any nudity and I really don't recall much in the way of bad language.  This isn't necessarily a bad thing, as I think it helps make the movie accessible to more people.  Like if I had a kid, I wouldn't feel like they couldn't watch this.  On the other hand, I think being safe or going for the lower rating might have taken away some of the bite this could have had.

What saves it is that Think... is actually pretty funny. It started out a little rough due to some really tired jokes used and I was worried that this was going to be stale, but once Think... got it's legs, it really seemed to take off.  Also, the cast is extremely attractive and you like everyone in it. The guys in particular were really easy to identify with and it's easy to see you hanging out with them, grabbing a beer or playing ball. That's not to say that the women aren't good as well.  They all come off as normal people just looking to meet the right one.  Nobody ever seems too crazy or unrealistic.

While I thought guys like Michael Ealy, Romany Malco and Meagan Good (god damn!) stood out, the real star of the film was Kevin Hart.  He's a comedic dynamo!  In most of the movies I've seen him in, he's been relegated to smaller, supporting roles, but here he really gets a chance to shine and show how funny he is.  He steals every scene he's in and elevated the film to beyond just an average rom-com.

As you might expect, I have a few minor complaints.  It does run a little long, just over two hours, and started to feel bogged down with all the characters and their stories.  I think even director Tim Story knew this, as it seemed like every time the pacing was slowing down a bit, Kevin Hart would appear and bring up the energy.  I haven't been a big fan of Tim Story due to his work on the Fantastic Four movies (not all his fault though), but I think he did a much better job here of working with a large ensemble cast.

As I said, the length was a minor complaint, because with this large of a cast, you run the risk of neglecting a character, which wouldn't be fair to everyone in the film.  They even had to have Kevin Hart's character narrate throughout the movie to keep things moving along and not make the run time even longer.  As much as I liked the cast, it might have helped to maybe remove one of the couples, 'The Mama's Boy', perhaps, and this would have tightened up the movie significantly.  The screenplay was written by Keith Merryman and David A. Newman, who wrote last summer's Friends With Benefits. While I think they could have trimmed the screenplay down a bit, I think it's another good effort on their part.

These next points might be a little spoilerific, so skip until the end if you plan on seeing this right away:

Another thing that kind of put me off is that you never meet 'Happily Married Guy's' wife.  He's the one guy throughout the film that's in a stable relationship and says sweet things about her and his marriage, but even at the very end when all of the couples are together, his wife is nowhere to be seen.  That just seemed odd to me and a missed opportunity to have a funny payoff when introducing his wife to the audience.  It seemed like even the rest of the gang didn't even really know who his wife was.

One thing that got a collective groan from the audience was that Chris Brown makes an appearance at the beginning, but it's not much more than a cameo.  This leads me to believe that he may have been in this more, but they cut his role due his current 'popularity'.  I'm just speculating here, so don't quote me on this.  That's just the feeling I got.

Like with other movies, some of the characters live in immaculate places, in LA no less, that look like they most cost a fortune to live in.  Yet some of them never really go into detail about what they do for a living, so you're watching and going, how do these people pay for this stuff?  We don't know what they do for a living, you never see them working no matter what time of the day it is, but live in huge lofts in expensive areas.  When you hear people sitting around you making comments about this, it's clear that it's something that's getting noticed and not buying into anymore.

Here's another a weird thing, and this it a total spoiler, so be be warned.  I saw this the day after seeing The Five-Year Reunion (review coming next week) and that also has Kevin Hart in a supporting role.  Both movies involve a character that's a chef and they eventually open their own food truck.  Happy Endings on ABC (which is a very funny show) also has a character that fits this type.  This seems like a character type that's in real danger of being overused.  Seriously, how many people do you know that are chefs for one, but that also went into business for themselves with their own food truck?  I guess Hollywood thinks everyone does and that we all must identify with it.

This is all nitpicking though.  It didn't ruin my enjoyment of the film.

Think Like a Man isn't an amazing film, but it is consistently funny, has a likable, attrative cast and something I think most people will enjoy.  While I don't think it will 'change the game', I do think it might guide some people to look at the way they approach relationships a little bit.  If anything, I'm sure it will sell a few more copies of Steve Harvey's book, so I'm sure he's thrilled!  I'd say it's worth a matinee.