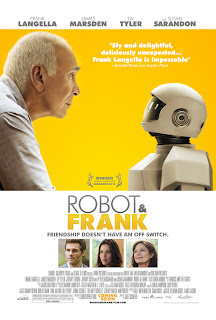 If I ever get a robot, I want it to speak with Patrick Stewart's voice.

Set in the near future, Frank (Frank Langella) is an ex-burgler living in a small home on the outskirts of town.  His dementia is getting worse, and is losing the ability to take care of himself.   His son (James Marsden), growing tired of driving out to take care of him, buys him a robot caretaker.

Frank's not too wild about the robot (voiced by Peter Sarsgaard) at first, but he learns that the robot isn't programmed to know if an activity is illegal or not.  Even better, Frank learns the robot can also pick locks.  This enables Frank to plan a few more robberies, which keeps his mind engaged and gives him something to do again.  His mind isn't completely gone though, as he spends some time flirting with the local librarian (Susan Sarandon).

For a time, Frank's daughter (Liv Tyler) comes to take care of him, and deactivates the robot.  This upsets Frank, as it's clear that he's become attached to the robot, and also time is running out on the robberies they have planned.  Eventually, he's able to convince her to let him keep the robot, and she leaves.

The robberies are successful, but the local authorities (led by Jeremy Sisto), knowing Frank's history, question him and surveil his house.  The robot points out to Frank that his memory can be used against him and advises him to format his memory.  This puts Frank in a tough spot.  This robot is his only friend and is it right to erase its memory, even if doing so will keep him out of jail.

This was an impressive debut for director Jake Schreirer.  He kept things moving and easy to follow.  The robot has a simple design, similar to modern robots by Honda, so the premise never seems hard to believe.  Based on how our technology is advancing, this genuinely feels like something that could happen just a few years from now.  The script by Christopher D. Ford hits all the right notes.  It's smart, funny and sweet.  The story is fairly straightforward, but I felt it was emotionally complex.

Frank Langella is always great and he gives another fantastic performance.  He's able to say so much with those soulful eyes of his and it's hard to not get wrapped up in what's going through his mind.  It's a very small cast, and they all play their parts well, but this is really just about Frank and his robot.  Their interaction is touching and humorous.  I wasn't expecting to be as moved by this as I was, nor was I expecting how funny it turned out.

Movies like Robot & Frank are why I love movies.  It's a smart movie about aging and the fragility of memory, but it's also a charming and funny buddy movie.  Led by Frank Langella's wonderful performance, this might be one of my favorite films of the year.  I highly recommend checking it out if it's playing at a theater near you, like The Vine (www.vinecinema.com).