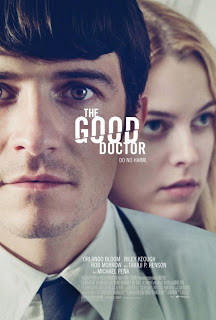 With a title like The Good Doctor, you know this can only turn out one of two ways.  He's either actually going to be a good doctor, or he's going to be a terrible doctor.  I'll let you have a guess at which.  Don't worry, you've got a fifty-percent chance of being right.  Spoilers ahead...

Martin Blake (Orlando Bloom) is young doctor starting his residency.  He's having difficulty fitting in, and clashes with one of the nurses (Taraji P. Henson).  He's desperately wants the respect of his co-workers and supervisor (Rob Morrow).  After initially screwing up with a patient, he gets a chance to redeem himself when a cute, young patient, Diane (Riley Keogh), comes in with a kidney infection.  Under Blake's care, Diane quickly recovers and is sent home.  Diane's parents are so happy they invite him over for dinner.

There's a darkness to Blake though, and while there are hints to this early in the movie, they go unnoticed by his co-workers.  He sabotages Diane's recovery, forcing her ailment to relapse, which leads to an even longer stay in the hospital.  Blake spends even more time with Diane, continuing to sabotague her while telling his supervisors that she's been 'resistant to treatment'.  It might have been funny if it weren't so creepy.

As you might guess, things take a turn for the worse and he loses the patient.  At one point Diane's father confronts him in the hospital and accuses him of killing his daughter.  He insists he did everything he could, but the reality is that he did kill her.  Worse yet, he didn't really seem to have any guilt about it.  His cold demeanor is looked at as professional detachment by his supervisor and hospital psychologist.  His colleagues try to reassure him by saying that everyone loses a patient at some point, and that you aren't really a doctor until you do.

Later, a irresponsible orderly (Michael Peña) finds something that could be used against Blake, and uses this leverage to bribe him for drugs.  This leads to another series of bad decisions by Blake as the movie continues into the bizarre.

Normally, I don't mind character studies or movies that have ambiguity about them, but this was one where it bugged me.  From the opening moments right up until the very end, Blake engages in a series of increasingly illogical decisions that just made me scratch my head.  The problem I had was that it was never explained why he was doing these things.  Was he really so driven to gain respect that he'd do anything to get there.  Was he was falling for Diane and didn't want to let her go?   Maybe he was simply a psychopath.  You see that Blake has a scar on his forehead, that he attempts to cover with a really bad, Donald Trump-like haircut.  Are we to guess that he had head trauma in his past? If so, do they really let doctors with a history of head trauma become doctors? Did he have a psychological evaluation at any point? Maybe I'm missing the point they were trying to make here, but I don't like making excuses for a film.

It's nice looking at least, but the pace was sluggish and I couldn't figure out what the tone was.  I think that director Lance Daly and John Enbom couldn't either.  If this was meant to be a dark comedy, then there should have been some actual humor in it, and if this was a character study, they didn't give us about the character to care.  There's not enough depth.

I also didn't get enough chemistry between Orlando Bloom and Riley Keogh to care about their relationship. I felt both of them were very flat together.  I do think Bloom brought a creepy, detached element to his performance, but it seemed he spent a lot of time just staring out into the distance.  I enjoyed the supporting performances from Taraji P. Henson and Michael Peña more. While they didn't get a lot of screen time, I felt like they both had more going on and wanted to see more of them.  I think they really missed an opportunity with Peña's character to do more there.

The Good Doctor could have been a dark and complex story, but it misses the mark because it failed to give us a compelling character to watch.  We end up getting something that was creepy, unsatisfying and a little boring.  It's not awful, but there's really nothing to recommend about it. You can skip this one, folks.