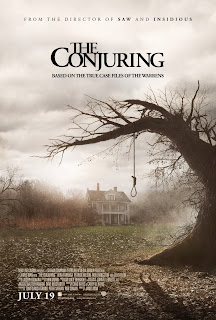 Haunted house films have been played to death, haven't they?  I'm surprised they keep making them, because what else can they do?  However, every once in a while someone makes one that has an interesting style, twist, or is simply well made.  The Conjuring is one of these films.

The Conjuring grabs you in a unique way right off the bat.  Instead of getting simply meeting the family the story is ultimately about, we actually begin by being introduced to a pair of paranormal investigators.  Fairly well known and respected, Ed and Lorraine Warren (Patrick Wilson and Vera Farmiga) explain how they solved a previous case they worked on.  It's like a separate short story featuring a creepy-ass doll.  Beginning the film this way allowed them to setup some of the rules and background without hamfisted exposition later on.  It also establishes the Warrens as a capable duo that really believes in what they are doing.  They genuinely want to help people that think they are being haunted or possessed, and are not trying to take advantage of people or exploit them.  You don't see the Warrens as frauds or anything like that.

We move on to the Perron family as they move into a new home.  Roger (Ron Livingston) and Carolyn (Lily Taylor) have five girls, which could be a separate horror film by itself.  Wasting no time at all, they start noticing strange events around the house.  Things like clocks stopping at the same time every night, weird smells and noises, seeing things in the dark, and Carolyn starts getting random bruises.  Things continue to get worse and worse, leading to the Perrons contacting the Warrens for help.

The Warrens bring a team and setup cameras and equipment around the house to capture any events that occur.  This part of the film reminded me of Poltergeist a bit.  I also liked the fact that one of the members of their team was a local cop (John Brotherton) that didn't believe in this stuff.  Even the Warrens were a bit skeptical and reluctant to check out the house at first.

More events happen after the team arrives and they begin to have an idea of what's causing these disturbances.  I liked that as they discovered more it didn't become ridiculous or convoluted.  It's a standard haunting/possession.  Sometimes keeping it simple works and the film is smarter because of it.  They even address the trope of why the family didn't move out when it was clear something bad was going on.

Another really strong aspect of The Conjuring is that you actually have a reason to like the Perron family.  They're just a normal family that you could sympathize with.  Plus, they don't do any of the typical stupid things that make you want to pull your hair out in typical horror films.  I also appreciated that they stuck to the rules the established in the beginning of the film.  Too often you see a horror film not being consistent with its own rules as the movie goes on.  I have to give credit to Chad and Carey Hayes for their screenplay.  The Conjuring is based on true events, which is something I'm always skeptical of, but this is one of the times where I was so invested in what was going on that I didn't even think about it.

The performances are all strong too.  Farmiga, Wilson, Taylor and Livingston are always solid and nobody was overdoing it.  Even the kids, played by Shanley Caswell, Hayley McFarland, Joey King, Mackenzie Foy and Kyla Deaver, all gave fine performances.  There's no weak links in the cast and everyone treated it seriously.  You really felt how terrified they were as a result.

The Conjuring has a genuinely creepy and eerie tone throughout the film.  While there are a few jump scares here and there, it doesn't resort to cheap scares or lots of blood.  Many times it relies on simple noises, or tricks with shadows and darkness, allowing your imagination to get the better of you.  I'm not embarrassed to admit it got me to jump more than a few times and I got the chills several times as well.  This was while watching in a fairly full theater, but it would be even scarier to watch this at home with the lights off and a good surround system.  I always know when a horror film gets to me when I walk upstairs to my bedroom and I check over my shoulder a few times.

Lastly, I was also really impressed with James Wan's direction.  It seems like he learned from his experiences with Insidious and applied that to The Conjuring.  I thought with Insidious the story got away from him a little bit towards the end, but with The Conjuring he actually managed to keep the tension level very high.  I also liked the attention to detail.  The film is set in the late-60's/early-70's and it really felt like a film made back then.  Not just in it's overall look, but in the style of the film.  This would fit right in with a marathon of films like The Omen or The Amityville Horror.   I had to kind of laugh at one scene where you're in the Warren's home and you see all this red carpet and really awful wallpaper everywhere, and said, "Yep, this is the 60's/70's".  The period helped with the creepiness as well.

The Conjuring is an old-school horror film.  It manages to be consistently scary by setting a creepy and eerie tone, without having to rely on special effects, excess blood or cheap jump scares.  It also has a smart, consistent story and strengthened by good performances that actually make you care about what's going on.  Easily one of the best horror films of 2013 and I highly recommend it to anyone that wants a good scare.