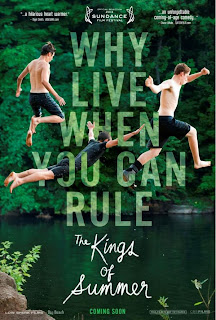 Three teen boys decide they're done with their parents, run away and build a house in the woods.  That's pretty much how you'd sum up The Kings of Summer.  If that were all there is to The Kings of Summer, then I could understand how this might have a limited appeal.  The good news is that once you get past the premise and opening moments, The Kings of Summer is a sweet and often hilarious coming-of-age story.

As summer vacation approaches, Joe (Nick Robinson) becomes increasingly frustrated with his father's attempts to get him to be responsible.  He encourages his best friend Patrick (Gabriel Basso), who's also grown tired of his overbearing parents, to join him.  A wild card named Biaggio (Moises Arias), whom the other two barely know, also tags along.

I do want to get a few things out of the way though.  As it began, I almost wasn't able to buy into the film, as it was really hard to understand Joe and Patrick's reasons for wanting out of their homes.  Joe's father, Frank (Nick Offerman), only seems to be on his case for not being more responsible.  Frank gets mad at him for things like taking an hour long shower and not picking up after himself.  A total monster, right?  Then, Frank has the audacity to schedule a family game night with his new girlfriend, and Joe's older sister (Alison Brie) and boyfriend.  Joe acts like a twerp, embarasses his father, and calls the police just to mess with him (which he apparently has done several times before).  This also has the end result of ruining things between Frank and his new girlfriend.  Lastly, Joe doesn't exactly seem to be the most motivated student either.  Is painting your main character as a dumb, lazy, entitled brat the best way to start your film?

Patrick's parents biggest crime seemed to be that they were a little smothering, and really nerdy.  Not exactly reason to run away either.  Biaggio didn't seem to have any motivation at all other than he didn't have any friends, and the other two let him tag along.  I'm sure people that grew up in households with real problems wouldn't have much to sympathize with here.  How would Joe handle real abuse or if Frank had been an alcoholic?  Look, I get that these are dumb kids and when you're a kid you think your parents are terrible even if they aren't, are and your problems are the worst in the world, but I just thought that was a little weak.  Anyway, the film gets past this part pretty quick, as if even they knew it was the flimsiest part.  Another thing masking this is that the opening of the film is peppered with humor.  When I'd start to scrutinize something, Nick Offerman would have a one of his many great moments, and I'd forget about it.  It's best to just think of the whole film as a boy's fantasy and it makes it a little easier to get past.

The trio finds a space in the woods where nobody can find them and build a place.  The enjoy their newfound freedom and learn to live off the land.  Another thing that was a little off was that the film starts with Joe building the world's worst bird house, so the idea that he could build a house (even with help) that could stand up on his own was a little goofy to me.  Plus, he also seemed to have professional level skill at making maps and designing floor plans.

Despite these flaws, the film takes off once they begin this adventure and it's a lot of fun to watch.  It doesn't take long to like the the kids and become invested in the story.  When I was their age my friends and I used to talk about taking a summer and building a fort or half pipe, so this is something that did speak to me on that level.  The trio have great chemistry, and the performances of Robinson, Basso and Arias really help sell that.  All three came off as very natural together.  I also appreciated that all three of them actually looked like they were the right age for their roles.  They all had that awkward teen look.  I was also impressed with how mature Robinson and Basso's performances were.

While the kids are gone, Frank and Patrick's parents (Megan Mullally and Marc Evan Jackson) haven't given up looking for them.  Despite what the kids think, their parents are genuinely concerned and care about them.  Mullally and Jackson are great, but the real star here was Nick Offerman.  If you're a fan of Ron Swanson from Parks & Rec, then you'll love his performance here.  Imagine Ron Swanson but even crankier.  He has some epic lines, particularly when dealing with two local cops (Mary Lynn Rajskub and Thomas Middleditch).  Another thing that makes this a great performance from Offerman is that we find out Frank is dealing with his own issues that explain why maybe he's been a little too hard on Joe.  You see some growth from him and he eventually has a nice reconciliation with Joe.

Meanwhile, the boys are having the time of their lives, but eventually a wrench gets thrown into the mix when Joe invites his dream girl Kelly (Erin Moriarty) out to hang out with them.  Joe hopes to impress Kelly with what they've done, but things don't always work out the way you hope.  Watching Joe's heartbreak will pull on your heartstrings a little bit, and you'll see how this affects the group and their friendship.  At times I saw a lot of my younger self in Joe, so as the movie went on I couldn't help by sympathize more and more.

Your enjoyment of The Kings of Summer is largely going to depend on how much you like these quirky, indie, hipsterish kinds of comedies.  I've heard this kind of film referred to on Adam Carolla's podcast as a "quirkedy".  I can't remember where I heard this first - might have been Anderson over on The Film Vault when he described his thoughts on the film - but I got a distinct Wes Anderson-vibe from film.  Think of it as Wes Andersen-lite.  Where The Kings of Summer differs is that I felt it had more of a sardonic tone about it.  Maybe also a tad less pretentious or hipsterish.

This leads me to another thing I loved about the film which was Moises Arias as Biaggio.  He's certainly a distinct looking person, and that works well to contrast the other two.  I guess the best way to describe him would be to imagine a teenage Kramer from Seinfeld, but then shrunk in half and mixed with a Sleestak.  Nearly everything he says is random or bizarre, as if he wasn't scripted.  Sometimes overuse of non-sequitur really bugs me, but here I thought it was funny every time.

Even if Biaggio's dialog wasn't scripted, I thought the script by Chris Galletta was extremely funny.  This was Galletta's first movie, so I'm really excited to see what comes next.  If director Jordan Vogt-Roberts set out to make a more cynical Wes Andersen-like film, then I think he succeeded.  This appears to be his first feature as well, so it's a nice way to start out and great collaboration between the writer and director.  Interestingly enough, like another recent coming-of-age-tale Mud, this also features some foreshadowing with a snake.  I really hate snakes, so that kind of stuff sticks with me.

Oh, one last thing before I wrap this up.  Something that kind of took me out of the film was that Patrick was wearing a cast the entire film.  The mention he's a wrestler, so I'm assuming his broke is ankle, but the movie seems to have forgotten he was wearing this.  He walks around for miles, you see a scene where they are sprinting, and then they dive into a lake.  They are out in the woods for weeks, but he was never concerned about his leg or re-injuring it?  I understand that kids will do stupid things like that, but it just seemed odd that a guy with a cast on would do all of these physical activities without any outward concern for further injury or showing any ill effects from continuing to push himself on it.  I know it's a nitpick, but I kept noticing it.

The Kings of Summer is a sweet, quirky and hilarious coming-of-age tale.  If you can buy into the fantasy, then you're in for some fantastic performances from Nick Offerman, Nick Robinson and Moises Arias.  This is one of the few films I've seen this year that I was upset when it was over and wished it had been longer.  I'm looking forward to watching it again just for all the scenes with Nick Offerman.  It's still in some select theaters, so I highly recommend checking it out soon.