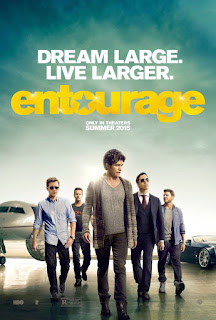 I've seen some reviews that claim you don't need to be an existing fan to enjoy the movie. As someone that's watched every season of Entourage, I'd have to say that's totally false. I can't see anyone that wasn't a fan of the show getting anything out of this (let alone having any desire to see it in the first place). What else would you expect? It's basically a four episode miniseries, and it hits the ground running. If you don't know who these characters are, or their relationships, you're going to be behind from the opening, and likely annoying your friends with questions throughout.

While I've watched every season of Entourage, I was never a huge fan. Most of the characters were so unlikeable, and situations they were in were so unrelatable, that it was hard for me to really get behind it. They seemed to know this as the film didn't seem to focus too much on any one character. I still didn't find it any more relatable though.

There are a few laughs here and there, but it was otherwise kind of meh overall. I never really thought that show was all that funny though. The movie seemed to hinge more on the cameos than clever writing.

That's really all I have to say about it. It's about as forgettable as any given episode, but if you're been really craving some new ones, then then film delivers on that. It's pretty much exactly what is advertised, so I'll give it credit for that. As said before, I'd only recommend this to fans of the show. I'd give it a pass otherwise.