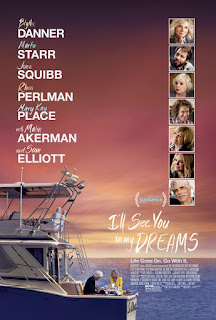 Here's a perfect example of a small, independent character drama with no real plot or story. That's not necessarily a bad thing though.

I'll See You in My Dreams is a relatively short film, just about 90 minutes, but it's because there's not much of a story to tell. Once the film establishes everything, it just seems to go in a loop of watching Blythe Danner's character hang out, drink, play cards with friends, get freaked out by a rat in her house, and then go on an occasional date with Sam Elliott.

The aforementioned Sam Elliott was one of my favorite things about the film. You know how you see an older character from time to time and say to yourself, "I wanna be like that when I grow up"? I was saying that about Sam Elliott in this film. The rest of the cast is great, but I could have used a little more Rhea Perlman. I need a little more Carla Tortelli in my life.

This is the kind of movie that you start to forget right after seeing it. There's no big laughs, nothing that stands out. The only thing that really stuck with me is that they show you a picture of Blythe Danner when she was much younger and it's crazy how much the picture looked like Gwyneth Paltrow (Danner is her mother, if you didn't know).

I actually got the most entertainment out of the audience I saw this with. I was definitely at the Senior matinee showing. I don't know if it's because of hearing loss, but I've never heard a crowd collectively talk through a movie as much as they did. At one point when Sam Elliott asks Blythe Danner if he can go out with her again, a few rows behind me I hear an older lady yell, "Oh, hell yeah!" That was probably the biggest laugh of the film.

It's maybe little too cute for it's own good, but I'll See You in My Dreams is fairly entertaining, harmless and inoffensive. Save it for a rental. Decent date movie.