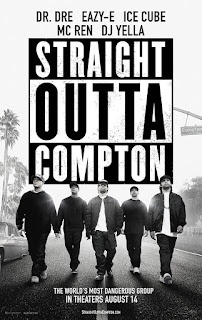 When I see a two and a half hour biopic released in mid-August about a group I didn't follow when they were active, I worry if there's any way I can enjoy it. I think that's the challenge of any biopic, can you still enjoy it when not familiar with the subject? When N.W.A. came out I wasn't really into rap. I was still in my hair metal phase and only just starting to accept bands like Pearl Jam. I think the only rap albums I owned at the time was Run-D.M.C.'s Tougher Than Leather and a Fresh Prince album. I can remember being annoyed with my friends that would listen to Straight Outta Compton, and saying they were trying too hard to be cool. I've since gotten into rap, but I was definitely behind the times when it first hit the scene.

Fortunately, Straight Outta Compton can not only be enjoyed by those not familiar, it's simply a good movie. Biopics can be a little melodramatic, so the lack of it in Straight Outta Compton is something I really enjoyed about it. When these guys had had beef with anyone or anything, they channeled it in their music, and if that didn't settle it, then they'd get in a fight. I prefer that to passive-aggressive, whiny shit. I was also worried that this film might pander a little too much based on what I saw in the trailers, but fortunately it's limited to just those few scenes and is not a theme of the film. It's one thing to acknowledge their influence (which is undeniable at this point), but its' another to just have a movie actively kissing these guys asses. With the exception of Suge Knight, most everyone comes away looking pretty good.

The cast is really great and it's impressive that they were able to get people that looked so much like their counterparts without sacrificing acting skill. They even nailed some of the cameos and smaller roles. With the exception of Paul Giamatti, they are all relative unknowns, but you wouldn't know it. There isn't a weak performance from anyone, and it's saying a lot when the best performance in the film doesn't come from Giamatti. For me, the biggest surprise was that Ice Cube was played by O'Shea Jackson Jr., Ice Cube's actual son. Jackson Jr. can come away from this knowing he's clearly the better actor in the family.

I mentioned the length of the film, and it is a little long, but this is a time where it didn't feel like it was needlessly stretched out. They cover a lot of stuff and don't rush through it, so it doesn't feel overwhelming. I was also pretty invested in what was going on, so I wasn't bored at all. I think it helps that guys like Dre and Ice Cube are still in the public eye. Most biopics come out well after the subject has passed on, or their work isn't current. I can't seem to go a day without seeing another commercial for Beats by Dre or a trailer for another bad Ice Cube comedy. Hell, before Straight Outta Compton played, they showed a trailer for Ride Along 2. Ride Along 2? I don't know anyone that saw the first. Anyway, I found it more interesting watching where these guys came from when you know where they are currently in their careers.

Straight Outta Compton lives up to the hype. Even thought this would have done well if released in a better month, it was a smart move to release this in mid-August. It's pretty much the only thing worth seeing right now, so it's easy to recommend, even to people aren't fans or aren't overly familiar with N.W.A. or it's members.

Oh, I just thought I add that I can't drive without hearing "Boyz-n-the-Hood" in my head now.