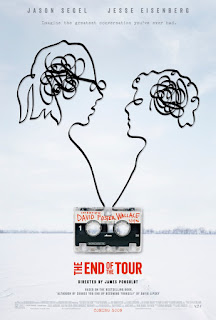 Here's another example of a movie I enjoyed despite not knowing anything about the it or the people involved. I didn't have anything better to do at 4:30 on a Saturday, so what the hell, right?

The End of the Tour is the adaptation of David Lipsky's book Although Of Course You End Up Becoming Yourself, which details a five day tour he took with David Foster Wallace while promoting his book Infinite Jest. I've only heard of Infinite Jest, but have never read it. The movie doesn't really go into the book though, so you don't really need to know anything about that. It's basically a road movie where Lipsky interviews Wallace and they talk about his feelings on life, women, fame and pop culture. I felt like a fly on the wall where I really wanted to join in on the conversation.

Despite no familiarity with Wallace or his work, ten minutes into the film I was sold. One of Lipsky and Wallace's first conversations hit me in a very close and personal way that actually made me think about how I'm living my life. It was that profound and in my head. It affected me so much that immediately after I got home from seeing the film I went on to Amazon and ordered a copy of Infinite Jest and Lipsky's book. I just liked the cut of their jib. I was then saddened to see that Wallace committed suicide back in 2008. The movie doesn't mention that, but it shouldn't have surprised me based on how much Wallace talked about his depression. Mentioning his suicide in the film would have taken away from what the film was really about.

Jason Segel nails it as David Foster Wallace, and it's easily his best performance as an actor. The physical resemblance is pretty spot on as well (check some side-by-sides of them on a Google image search). I've heard fans of DFW have been extremely critical of Segel's casting, but I hope they keep an open mind and still give the film a shot. I don't know anything about David Lipsky, but I enjoyed Jesse Eisenberg's performance. I like Eisenberg in roles like this. Their interaction feels very authentic and intimate.

The End of the Tour is a smart, funny, thought provoking and different movie. It's worth watching just for the performances, but it really made me think about my own life. This is a smaller release, so most will have to watch this once it hits video, but it's well worth the wait.