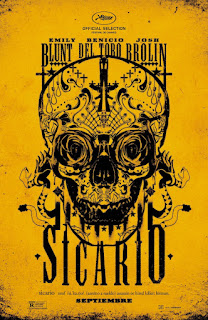 Has anyone been watching Narcos on Netflix lately? If so, Sicario will fit right in with all the talk of cartels and hitmen on that show. Sicario feels like a distant, spiritual sequel to Narcos.

Sicario starts off with a bang, literally, and never lets up on the tension. It's so tense that I realized towards the end that I was actually sweating in my seat a little bit. There's a sense of dread that permeates the film. This is accentuated by the haunting soundtrack. I couldn't help but feel that something awful was going to happen at any moment. In a lot of ways, especially with the body count, it's a horror film. It's scarier than most modern horror films anyway.

It's super dark, complex and plays with moral and legal ambiguity. Sicario toys with you. Until I realized Denis Villeneuve (Prisoners) directed, I thought I was watching a David Fincher movie. He certainly seems on a similar career path as Fincher.

The cinematography is beautiful as well. There are multiple shots where you're just following these guys speed through the border and Juarez, and it's oddly hypnotic. Then, there's some of the best use of heat and night vision I've ever seen in a movie. I don't play a lot of first person shooters, but someone should make a video game out of this if it doesn't already exist.

The cast is great and you'd have a hard time finding better performances from Josh Brolin, Emily Blunt and Benicio Del Toro. I was hoping for a little more Full Metal Bitch from Blunt, but she plays a little more vulnerable here. Still, she gives a great performance. Del Toro just kills it though. From the moment he shows up on screen, you know there's something up with him. I'd love a sequel just to see what he's up to after the events of Sicario.

Sicario is one of the best movies of the year and one of the most intense movies I've seen in a long time. It really sticks with you, and I haven't been able to stop thinking about it. I can't recommend it highly enough. Put it on the top of your list of things to see in the theater. I can't think of anything wrong with it, so you know that means...