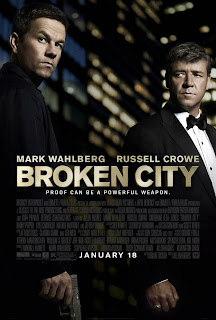 Mark Wahlberg plays a Billy Taggart, a former cop (shocker, I know) turned private investigator in Broken City.  The prologue shows us that he beat a murder rap, but due to the circumstances of killing Mayor Hostetler (Russell Crowe) and Chief of Police Faribanks (Jeffrey Wright) tell him he's still off the force.  Hostetler thinks Taggart is a hero though, as the person he murdered was a suspected rapist and murderer that got off on a technicality.

Seven years later, Taggart is barely getting by as a P.I.  He's too nice and letting people get away with not paying him in a timely manner, or just not paying him at all. Mayor Hostetler comes to the rescue when he offers Taggart $50,000 investigate his wife (Catherine Zeta-Jones), whom he suspects is having an affair.  Hostetler is in the political fight of his life as the election looms around the corner, and if the affair is true it could be really damaging to his campaign.  Taggart investigates, things are discovered, and we learn there's a lot more going on than just a simple affair.

I think that all of that 'going on' is the problem with Broken City that prevents it from being a much better film.  The plot gets needlessly complex and twisty for it's own good.  There are lots of threads that drag the story down or don't have any kind of payoff.  It wants to be smarter than it is, but when you find out what's really going on, it's kind of let down.  This was writer Brian Tucker's first film, and it's not a bad effort. The story doesn't insult the intelligence or anything like that, but it only manages to be a very paint-by-the-numbers thriller. The other problem with the script is that there no snap to it at all.  It's not that it needed more humor, but considering all of the threats and politics involved, you'd think there'd be more bite.

I've often criticized Mark Wahlberg for not having a lot of range, and this is another role that doesn't challenge him at all, but I actually thought he was well cast here.  The role needed that tough, no nonsense guy, and that's pretty much exactly what he is.  One the unnecessary subplots involved Taggart's girlfriend (Natalie Martinez), and while it explains the murder at the beginning of the film, it only amounted to giving Taggart an excuse to go off the rails for a minute.  You see him hit rock bottom, but then he immediately bounces back, as if it was just something he needed to get out of his system.  This whole part could have been removed, and it would have tightened the movie up quite a bit.

I did enjoy Wahlberg's chemistry and relationship with his assistant (Alona Tal) though.  They have a few nice scenes where he's showing her the ropes, and I would have liked to see a little more of that in the film.  It doesn't hurt that Alona Tal is a looker either.

The strength of the film is the cast.  Russell Crowe does a good job here, and I this the first film in a while that I really enjoyed him in or I didn't think he was completely phoning it in.  The problem with the character is that he plays out very predictably, but that's not Crowe's fault.  Catherine Zeta-Jones is the adulterous wife, but there wasn't enough to her character to justify getting such a well known actor to play the role.  Jeffrey Wright is also good as the Police Chief that you don't like at first, but come around to.  Barry Pepper returns to the big screen as Jack Valliant, the man running against Hostetler, and Kyle Chandler also has a small role as his campaign manager.

Allen Hughes (of "The Hughes Brothers" that directed The Book of Eli) does a descent job with the direction.  It's capable work, but there aren't any surprises, and there's nothing distinctive about the visuals or style.

Broken City isn't a broken movie (I don't quite understand the hate on rottentomatoes for it), nor a bad one, but it's also not a particularly good one either.  It's well acted and moves along enough to be fairly entertaining, but doesn't have enough originality to stand out or be all that memorable.  This is the kind of film you'll enjoy enough when you're bored and need to kill some time.  Rent it on a rainy day.