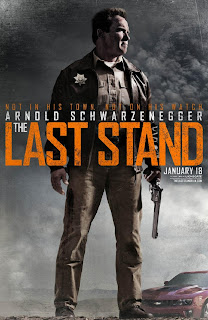 Former Governor of California tries his stab at acting...wait a second, let me try this again.  Former action star, turned Governor, returns to the genre that made him famous in The Last Stand.  I have to admit that I was more than a little geeked up to see The Last Stand.  Come on, it's Arnold!  This guy was my idol for a large portion of my youth, and I still go back through his older films on a fairly regular basis.  I don't think I'm alone in saying it's exciting to see him back on the big screen.

Schwarzenegger plays Ray Owens, the sheriff of the small border town of Sommerton Junction, AZ.  He's a former LA cop, which was the movie's way of telling you that he must have been a badass before coming to AZ for a quieter life.  Some quick research showed that there is no actual Summerton Junction in Arizona, but there is a Somerton that's close to the border, so I'm not sure why they didn't just go with that.  Anyway, Sheriff Owens is enjoying a simple day with the goofy locals, like Johnny Knoxville. We learn a little about his deputies, and they appear inept for the most part.  Then again, if Luis Guzmán is one of your deputies, then you're not exactly working with the best of the best.  One wants to transfer because he wants more excitement (so you know he'll be the first to die), and his female deputy had a relationship with the guy that's currently locked up in their lone jail cell.  Whatever, none of it is really important.  Arnold notices a few guys that didn't look right to him (one of which was played by Peter Stormare), and they investigate.

We then meet FBI Agent Bannister (Forest Whitaker) who's overseeing the transfer of a drug kingpin Gabriel Cortez (Eduardo Noriega).  It takes almost no time before this transfer is hijacked by various henchmen and Cortez escapes in a fancy, modified sports car.  He's about as generic a bad guy as they come, and you never feel any threat from the guy at all.  He doesn't even carry a gun.  He just drives and offers people large sums of money as bribes.  Yet we're reminded that he's worse than Pablo Escobar, so we're supposed to be scared, I guess.

Speaking of the getaway car, they go out of their way to tell you it can go upwards of 200 mph and that it can outrun a helicopter, which is why they are driving rather than just fly over the border.  But in the very next scene, a helicopter is on the tail of the car and not having any trouble keeping up.  So how does he lose the helicopter?  Does he floor the one-of-a-kind sports car, leaving the helicopter in it's wake?  No, he slams on his breaks and turns his lights off, so the copter can't find them again on the dark, unlit road.  It's a good thing they spent all that time telling us how fast that car was, especially when they don't use that speed in the one situation where it would be useful.  This might be the kind of movie that will bug car enthusiasts, as there are lots of things done that don't make a lot of sense.  You see driving on the wrong side of the road against traffic for no real reason, and there's a 180 that transitions into the car speeding in reverse.  I've always wondered why such an abrupt transition in speed and direction never seems to hurt the car.  Also, don't movie guys know that cars can only go so fast in reverse?  There's no advantage to speeding in reverse, and we see it all too often in movies simply because it's cool looking.  There are some entertaining car chases though, so it's not all bad.  It's just the type of stuff I'm noticing more and more.

This actually has a pretty decent supporting cast, but there's nothing to any of the characters, which seemed like kind of a waste.  Johnny Knoxville isn't in the movie as much as the trailer would have you believe (which is probably a good thing), and Luis Guzmán didn't get many opportunities to provide the kind of comic relief we're used to seeing from him.  Sif from Thor (Jaimie Alexander) plays the only capable deputy at Arnold's disposal, but while there are flashes where you think she might get to be more of a badass, it doesn't play out that way.  Maybe we'll get to see more of her in Thor: The Dark World.  The movie also wastes Genesis Rodriguez as a FBI agent that's kidnapped by Cortez.  I'm anxiously awaiting the film that uses her...um, assets...to their fullest.

The one stand out was Peter Stormare.  If you've been following his career, then you know he either plays a bad guy, a weird guy, or a weird, bad guy.  Here he plays a weird bad guy, and even adopts a bad southern accent (he's Swedish).  He seemed to be having fun with the role though, and managed to keep his accent, which is more than I can say for the Rodrigo Santoro, who played Frank.  We first hear him speaking with a forced sounding American accent (he's from Brazil), as we learn that he's an ex-Marine (they even put a Semper Fi tattoo on his forearm, so we wouldn't be confused about that).  He's some kind of screwup though, as he's in jail for some reason we never learn.  He yells at Sif early on, and his real accent bleeds through. From that point, it's like he said screw it and didn't bother hiding it anymore.

Then again, I'm complaining about realistic accents in a movie that stars a large Austrian man, who's never had the best command of the English language, playing the sheriff of a small town in Arizona.

There's not a lot of attention to detail, which is usually hard for me to overlook.  I'd fault director Jee-woon Kim for this, but he seemed to understand he wasn't making a smart movie here, and did a good job of making the kind of action film we've come to expect form Arnold.  The movie is paced well and when the action gets going, it's actually pretty fun.  The violence is sprinkled with humor, so you never take it too seriously and just go with it.

Arnold can still carry a movie, but I'd like to see him change pace a little.  There's the inevitable showdown at the end of the film, and I couldn't help but thinking that he looked like a top-heavy action figure that you just managed to finally balance, but could tip over for any reason.  I was curious to see how they'd edit the fight to cover for the fact that he's a 65-year-old man that's lost several steps, and doesn't have that same physicality that made him famous.  They actually did a good job with that final fight scene, and it kind of reminded me more of and old warrior or boxer that may not have his speed, but that power is still there when he needs it.

Despite everything I just said, I still had fun with The Last Stand.  At it's heart it's really no different from any other Schwarzenegger film, and it has all the things we love about them:  cheesy one-liners, silly humor, lots of guns and violence, and a simple story.  If that's your cup of tea (Arnold would say you need to drink beer), then I think you'll enjoy The Last Stand.