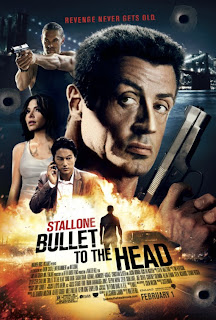 For the third consecutive week we have another movie from one of the Expendables. We had Schwarzenegger's The Last Stand, then Statham's Parker, and now Sylvester Stallone's Bullet to the Head.  As far action nostalgia goes, Stallone is in the lead.

The basic plot of Bullet to the Head isn't anything new, in fact it's not all that far from Parker when you think about it.  James Bonomo, not to be confused by a bonobo monkey, which is probably why he goes by "Jimmy Bobo", is a hitman in Louisiana. After a successful hit, he and his partner are ambushed by yet another hitman named Keegan (Jason Momoa).  Jimmy's partner is killed, and now he wants revenge on the people responsible for his partner's death.

Meanwhile, Taylor Kwon (Sung Kang), a DC cop investigating the original hit is dismissed by local law enforcement.  He's not interested in the hitman though, he wants the guy that hired him.  Taylor reluctantly teams up with Jimmy, who believes he was double-crossed, and are basically after the same guy.  This is a tenuous alliance as they are obviously on opposite sides of the law.  There's also a pretty big personality conflict as Jimmy prefers to knock down doors and beat heads in to get what he wants, where Taylor does the majority of his investigation through his smartphone.

While it's a little clumsy, the use of the smartphone allows for most of the exposition to explain who they are going after next. It's still very paint by numbers, but it also illustrates what was wrong about Parker.  It doesn't take detours to develop needless characters, or have drastic shifts in tone.  In fact, the movie may have benefit from a little more character development, but it's also the type of movie where you really don't care.  We're just watching these guys get from point A to point B, disposing of over-the-top villains (Christian Slater, Brian Van Holt and Adewale Akinnuoye-Agbaje) along the way.

Once these guys team up, we're basically watching a buddy cop film, only much snarkier.  Jimmy Bobo doesn't screw around, both in action and word, and Stallone seemed like he was having a lot of fun with the role.  Even more fun than he was having in either of The Expendables movies.  Alessandro Camon's screenplay (based off a graphic novel by Alexis Nolent) has some pretty funny dialog, and while the tone was very caustic, it seemed like characters would shout and fly-off-the-handle for any reason.  It can be a little silly at times, but I wasn't expecting a smart, complex story.

I couldn't help but think that Jimmy Bobo is a cranky old man, but then I'm reminded that Stallone is a senior citizen (he's 66). He's also a senior citizen that's in better shape than people half his age (including myself), and can probably kick their asses as well. Stallone has veins on top of veins, and he made me want to hit the gym and go on a diet.  He's even in better shape than his rival hitman, Jason Momoa.  Momoa doesn't exactly expand his range here, but he's at least less grunty then he was in Conan or Game of Thrones.  His character is still very one dimensional, but he had a terminator-like insanity about him that was fun to watch.  It's not like you start to root for him, but it was just as entertaining to watch him run around shooting things up as it was to watch Stallone.

This may have been due to having to sit so close to the screen, but Bullet to the Head suffers from the same shaky, handheld camera work and quick cuts that many other action films these days are plagued by.  I don't get why the action was shot this way, and I wanted to punch the camera guy and editor at times.  You don't have to shoot everything so tight, and you don't need to cut after every punch.  Let it play out and let us see what's happening.  Even fights that took place in open areas had a lot of tight shots that made it difficult to see what was going on.  When I see this kid of editing, I usually think it's because they are covering for bad fight choreography or actors that don't have the physical ability to pull it off, but we're talking about Sylvester Stallone and Jason Momoa here.  Physicality shouldn't be a problem.  I know Stallone has had a few serious injuries lately, so maybe he had to pull back a bit, but it didn't look like wasn't capable.

The real star of the film was the sound team.  You hear and feel every slam and thud, and gunshots are loud as hell.  This helped the action feel a little more brutal than what you actually see on screen.  Veteran director Walter Hill kept the story going and it doesn't run too long.  There's a gritty style about the it, and it really reminded me of older action films.  Keep in mind that Walter Hill has directed movies like 48 Hours, Red Heat, as well as The Warriors and even Brewster's Millions, so he was the right guy for this.

Bullet to the Head brings the testosterone-fueled, balls-out action and smart ass dialog that fans of old-school, buddy-cop flicks crave.  It's brainless, but aren't most Sylvester Stallone movies?  If you're up for a fun action flick, then give Bullet to the Head a shot.  Do you see what I did there?