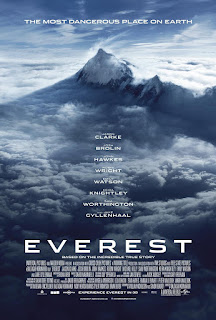 Beware of a movie that begins by telling you how difficult it is to climb Everest and how many people have died trying to do it. You actually want me to watch this movie, right? Throughout they continue to hammer home how dangerous it is and how things can go south quickly. Are you sure you want me to sit through this whole thing? Guess how the movie plays out?

Everest is rough to watch at times. You're seeing a group of people struggling with this feat, and then it continues to get worse and worse. It's no surprise that it's not going to end well for a lot of them. If you like seeing lots of people die or frozen solid, then this is for you. Joy and triumph are not words I'd use to describe Everest. I get the whole man against nature element, but I can't help but wonder why anyone bothers with such an extreme. Why not just do those Spartan Races, and I don't even like those things.

Ultimately. the biggest problem with the movie is that it's hard to feel sympathy for the characters. They never give much more motivation than, 'because it's there'. Nobody's making them do this. It's not like anyone's got a gun to their heads, and they are offered multiple times to turn around when it looks like it's going to be too risky. At the end, I was as cold as as Everest.

Just like how Black Mass shows you pictures of the real people involved, Everest does that too. Normally that helps me connect to the characters, but even seeing them I still couldn't. I also found it a little funny that the makers of the film weren't as concerned for nailing the look. Aside from being much better looking, most of the actors looked nothing like their counterparts. It's kind of irrelevant though, since most of the actors are unrecognizable through much of the film. If it's not their facial hair, then it's the layers and layers of clothing and facial covering obscuring their identity. I was usually confused as to who was who most of the time, unless they had a really distinctive voice. They could have cast a bunch of unknowns and gotten the same effect. Having said that, the performances are good even though it seems like a waste of a lot of big names. I thought Black Mass underutilized a great cast, but in Everest they are completely wasted. Jason Clarke and Josh Brolin stand out for the most part, but I think in her limited screen time I think the only performance I connected with was Keira Knightley's.

Great, great cinematography. Everest is a gorgeous film, even when it's at it's most perilous. I know there was some CG used, but it was used to good effect. I saw it on IMAX 3D. While IMAX was a good format for the film, the 3D did absolutely nothing for it. If you're gonna experience this on the big screen, opt for a larger format, but see if you can avoid 3D.

Everest is a great looking, well-made movie, but it's ultimately a downer. This is one of those movies you'll put in that category of a good movie that you'll never want to see again. I can't recommend anything above a matinee.