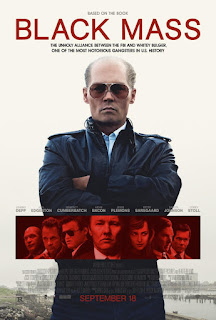 Black Mass is one of those movies that I really look forward to. Even from the trailer, you can see it checks all of the boxes: movie about a real gangster, set in the 70's, a great cast and great actor diving deep into the main role. Black Mass delivers on all of this. Mostly...

Black Mass, from this point in the review will be abbreviated to BM, which will certainly not cause any confusion with anything else, starts off with great dialog and a compelling story. I had no familiarity with Whitey Bulger before seeing BM, but it took no time at all to get into it. The story builds and builds, but then due to the nature of how the real life events played out, it loses steam towards the end. I won't spoil it here, but if you're familiar with Whitey Bulger, you might already know what I'm referring to. It doesn't necessarily ruin the movie necessarily, but it's an unsatisfying climax.

Welcome back, Johnny Depp. We missed you. After a series of shitty movies and silly roles, it's nice to see Depp return to serious acting. He's freaking fantastic and unrecognizable at times. Colored contacts usually weird me out, but here they were used to great effect. It really made his performance of Bulger that much more chilling and creepy. Don't be surprised if gets nominated come awards time. Joel Edgerton is great as well (supporting actor nod?). Just when I thought The Gift was the best I've seen him, he takes it to another level here. Jesse Plemons also really surprised me at well. The cast overall is fantastic. It's so stacked that there just isn't enough time to dedicate to everyone. How often can you say that guys like Benedict Cumberbatch, Kevin Bacon and Corey Stoll were underused?

BM also does one of my favorite things where at the end they show you pictures of the real people, and in some cases you'll see how much they really nailed the casting and look. They also use this to wrap up the loose ends to the story that they don't show you in the film.

Overall, Black Mass is an entertaining gangster drama and worth watching just for Johnny Depp's performance as Whitey Bulger. It's nothing you haven't seen before, but totally worth a matinee. If you wait for video, it would make a good double feature with The Departed or The Town.