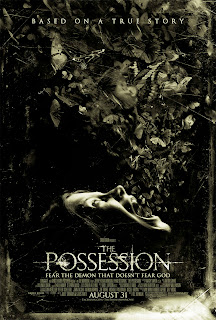 Did you know that a demon will show up on an MRI?  Neither did I, and as The Possession is based on a true story, you can take that as a fact.

Have I mentioned before how much I hate when a horror film starts with "based on a true story?"  When you watch The Possession, (not to be confused with The Apparition, which only came out last week), there's never a point where you'll say to yourself, "Oh yeah, this totally could have happened."  Another thing that I'm getting irritated with are possession stories where the 'possessee' is a child.  Why do demon spirits always aim the bar so low for victims?  Why not possess a rich athlete or actor, or better yet, a world leader?  Anyway, they do explain that the demon needed someone pure, hence the need for a young child, but that doesn't mean this isn't a tired cliché.

Anyway, enough ranting.  Let's get to the movie, shall we? Clyde (Jeffrey Dean Morgan) is a recently divorced father. He's a college basketball coach, which apparently means that he hasn't always been the most present husband and father.  He shares custody of his two daughters, and desperately trying to connect with them.  In keeping with the clichés, the oldest daughter (Madison Davenport) is one of those bitchy pre-teens that you can't help but dislike a little.  Clyde's ex-wife (Kyra Sedgwick), oscillates between getting along with Clyde and then absolute hating him.  She's dating a new guy that's also a bit of a tool.  The Possession could have been called "The Comedian vs. His Unlikable Family".

Clyde has the kids for the weekend and takes them to the nice new home he just purchased, which the pre-teen hates because it's in the middle of nowhere, I guess.  While driving around, they come across a yard sale, and his youngest daughter, Em (Natasha Calis), is drawn to an old, wooden box.  The films prologue shows a bit of the backstory of the box, which involved an invisible force beating the shit out of an old lady.  As more is revealed later, this scene makes less sense as you learn that the point of the box was to contain a demon.  It doesn't seem like this box does a very good job of containment if it can kill people when the box is still sealed.  What's the point?

As Em plays with the box, her behavior becomes increasingly odd and violent, while weird things happen in the house.  Clyde investigates, and finds this box was used to contain an ancient Jewish demon called a Dybbuk.  So, the only new twist to The Possession is that the demon is Jewish, instead of the Catholic demon we normally see.  It's interesting to note that the family's religion was never brought up during the movie, so you have to wonder if this demon need a Jewish person to possess.  Clyde finds a Hasidic Jew (Matisyahu), that's willing to help him with an exorcism.

This movie had a serious volume problem.  At times the sound would be normal or even muted, which I thought was a nice touch at times, but then out of nowhere the music would get oppressively loud or an ear splitting scream or sound would be used after a quieter moment.  This was done even when there weren't scary things going on.  For example, an abrupt drilling sound was used to seal up a doggie door in the house after they though a raccoon got into the house.  It was a very cheap way to get a jump scare and I found it very irritating and the movie progressed.

It does have nice performances.  I've been a big Jeffrey Dean Morgan fan ever since his role as "The Comedian" in Watchmen.  Here he shows a little more range emotionally, and I did find myself sympathizing and rooting for his character.  I hope he can get more roles.  I also thought Natasha Calis had moments where she was creepy.  I couldn't figure out why Kyra Sedgwick's boyfriend was so familiar until I saw the credits roll and realized that it was Grant freaking Show.  I haven't seen that guy since the original Melrose Place.  On another note, has Kyra Sedgwick gotten into yoga or something?  Early in the movie she's wearing a sleeveless shirt and her arms and shoulders looked pretty cut.  Keep up the good work, Kyra!

The reality is that I love horror films.  I love the rush you get from the scare or even the anticipation of what's about to happen.  When a movie can give me genuine chills, there's almost nothing better.  Unfortunately, The Possession is not one of these films.  I'm especially disappointed because Sam Raimi produced this and it's missing all the humor and campiness you'd expect with his involvement.  It's not a bad effort from director Ole Bornedal, but there's just nothing new here.  Writers Juliet Snowden and Stiles White are the same team that's brought you other lackluster films like Knowing and Boogeyman, so you can add this to their resume of lackluster films.

The Possession is just another middle-of-the-road possession movie.  It tries to cover for not being original or scary by using a lot of loud noises and cheap jump scares.  It had a few creepy moments, but overall this is very forgettable and not the kind of thing that will give you nightmares. Save it for rental.