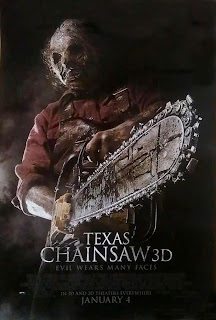 Oh, Leatherface, how the mighty have fallen.  Is the real reason you wear the mask so nobody will recognize you after all of these terrible movies?

It disappointing for me when watching these newer Texas Chainsaw installments.  The original Texas Chainsaw Massacre was one of the few slasher films in my adult life that actually scared me.  I remember renting it for the first time, watching it alone in the dark, and then being afraid to get up from the couch to go to bed.  I walked backwards up the stairs, so nobody would sneak up from behind me, but then realized that Leatherface could already be hiding upstairs, so I had to keep looking over my shoulder.  That's part of the fun of horror films for me. How you let you imagination get the better of you. Leatherface is such an icon in the horror genre, too.

So, after all that I'm sure you're thinking I hated the newest installment in the series, Texas Chainsaw 3D, right?  Well, you're wrong!  While far from a good movie, it's actually quite bad, I actually enjoyed this way more than I thought I was going to.  There were a few things about it that I actually liked.

The way the movie began was the first surprise.  It starts with showing you a brief recap of the original, 1974 Texas Chainsaw Massacre, and then picks up immediately after as a direct sequel, ignoring all other installments in the series (which isn't necessarily a bad thing).  There's actually a cameo from the original Leatherface in this scene (Gunnar Hansen).  If you've ever wondered how can some loony family and their mentally challenged, chainsaw wielding kin can run around unchecked in Texas killing people, well this actually addresses that.  A local policeman (Thom Barry) shows up asking the family to give up Jeb Sawyer.  Yes, you heard it, Leatherface's real name is Jeb.  They actually agree to this, but just as it's about to happen, a bunch of gun toting Texans show up to deliver some Texas justice.  All hell breaks loose and the house is burned down, with everyone in the house presumed dead.  You know how that's going to work out, right?

In the aftermath, an infant is found in their garage, and one of the members of this lynch mob take this child and raise her as their own.  The movie then fast forwards a good twenty years or so and we meet Heather (Alexandra Daddario).  She receives a note saying a grandmother she had no knowledge of has died, and then learns from her parents that she was adopted.  There's never any doubt from this point on whether or not she was the baby found all those years ago.  The thing you'll be asking yourself though is how the grandmother was able to track this baby down considering it was stolen from a garage (you do get a little explanation of this at the end). Anyway, Heather was left her grandmother's mansion, and she and a few friends take a road trip to check it out and handle the paperwork.

Once they arrive at the house, it's not too long before Leatherface (Dan Yeager) shows up and is back to his old antics.  From there it's the typical things seen in horror films.  You see a bunch of attractive, forgettable, and unlikable people making idiotic decisions that get them killed.  Like why would a person running from someone in an open field hide in a coffin in a freshly dug grave? Why not wear a flashing neon sign that says, "You can kill me right here!"  The deaths are bloody, but hugely unoriginal for the most part.  I wasn't expecting any kind of Rube Goldberg-esque kills that you see in the Final Destination or Saw films, but some creativity would have been nice.  Some of the kills you'll find yourself laughing at, which I think was why I wasn't as irritated by this as I normally would be.  It's not particularly scary either, with it mainly relying on predictable jump scares.

The problem is that this film is just lazy and inconsistent.  There's something that happens at the beginning of the film that if Heather would have listened to, then the whole movie wouldn't have played out like it did.  I guess that's how all these movies have to go these days.  It just really irritates me when a movie hinges around not doing things that any normal person would have done in the same situation.  It also takes way too long to get going.  It's not a particularly long movie, so it puzzles me that it would take as long to get to the killing.  Nobody sees a movie like Texas Chainsaw for the story.  I don't think directory John Luessenhop understood this.

However, there's this kind of dark twist to the film toward the end that actually piqued my interest. I won't spoil that twist here, but I got excited for a second that they were going to do something really different.  The problem is that they don't explore it enough.  Why put a good idea in a film if you're just going to be lazy about executing it?  It's a shame.  Maybe it has something to do with the fact that there were four different people credited with the writing.  How in the hell does it take four people to write a film about Leatherface?  No wonder there was a lot of inconsistency in the story.

Once again, the 3D is terrible and doesn't do anything for the movie.  You don't even have a choice to see it in regular 2D either, at least not at my theater.  There's no point in paying a premium to see bad 3D.  It seemed like it was primarily was used for lots of close-up, point-of-view shots of Tania Raymonde's (from Lost) ass.  She has a nice ass, so I'm not exactly complaining about that though.  However, I do have an issue with the ultimate tease they do at the end where Alexandra Daddario's shirt is torn down the middle, but somehow each side of shirt just manages to clings perfectly to her large boobs.  R-rated slasher films should not be teasing their audience with almost nudity.  What's the point?

If you're a fan of the Texas Chainsaw films, or slasher films in general, I didn't actually think this was the worst thing you could watch.  I had some fun with it since my expectations were so low. However, it's lazy, dumb, not scary, lacks any kind of creativity, and doesn't follow through enough on the one interesting thing they try to do.  This is a rental even if you're a fan.