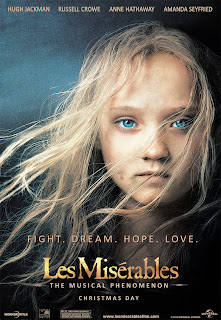 Was the title, translated to "The Miserable", meant to describe my experience watching this?

Okay, it wasn't that bad, but let me just come right out and start by saying that I generally don't like musicals.  I don't mind it where they occasionally break into song, especially if it's a good song, but then there's the type of musical where almost every line is sung.  Les Misérables is an example of the latter.  There something about the singing of casual dialog that seems silly to me and it pulls me out of a movie, rather than bring me in.  This might work differently on stage, but in a movie it's odd to sing a line of dialog that could have more easily been spoken.  There many times I had to struggle understanding what's being said, and if I'm missing key details because of this, that's a problem.

Yes, I know that Les Misérables was based on a book by Victor Hugo, and that got turned into a musical, and this movie adaptation is based off the musical.  After watching Les Mis, I felt like this was a good story that was lost in all the noise of the film.

The story primarily follows Jean Valjean (Hugh Jackman), a recently paroled convict.  Valjean skips out on his parole in an effort to restart his life.  I guess skipping out on parole is the best way to start clean, eh?  Apparently it's not, which is why a policeman/prison guard, Javert (Russell Crowe), spends the next 20 years trying to find him.  Valjean, under a fake name, is able to become a successful business man.  He promises a girl (Anne Hathaway) that used to work for him, but turned to prostitution, that he will take care of her daughter.  He fulfills his promise, and years later this girl falls in love with a man involved in a uprising. 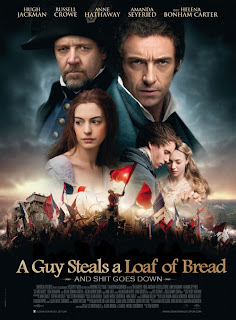 I stole this, but I thought it get a great synopsis of the plot.

So, lets just get to my issues with the film.  The whole movie felt like volume was turned up to 11.  Even the quiet parts were loud.   It actually made it more difficult to hear things.  There were times where people were singing over each other and I had no clue what they were singing about.  Was this a rock concert?  How about some dynamics?  A good example of this was there's a scene where Valjean is singing at the top of his lungs surrounded by people that are sleeping, but nobody wakes up or is disturbed by this.  Was this song all in his head, or are these the heaviest sleepers ever?

That's not to say that I disliked Hugh Jackman's performance though.  I thought he was great and showed a huge range of emotion throughout his arc.  I might have felt something at the end of the film had I cared about any of the characters.  As the movie ended, I actually felt bad that there's this emotional climax where I felt nothing.  Granted, this may be due to my cyborg nature asserting itself over my humanity, but whatever.

I don't know if it was an issue with Russell Crowe's vocal range or that it was a one-note song he was forced to sing throughout the film, but I thought he came off as really stiff and out of place. Everyone was singing rings around him (again, not his fault).  Plus, I really didn't like the character he played.  He's been chasing the same guy down for two decades even when it's clear that he's changed his life around.  Let it go, dude.  Maybe his motivation is something that's better explained in the books, but in the movie he felt too much like a one-dimensional, musical Terminator.

Speaking of the music, does Les Mis only have three songs?  I get that in a musical it makes sense to have leitmotifs so that you can tie things together musically, but I kept thinking throughout the film, "Oh, this song again, just with different lyrics."  When you have a band where all of their songs sound the same, they usually go away pretty fast because it gets old, or people remember them as talentless hacks.

Much has been made of Anne Hathaway's performance, and while I did think it was a great performance, she's barely in the film.  I feel it was an issue of something being overhyped. Everyone knows she's going to perform this super emotional rendition of "I Dreamed a Dream", but when the song starts I'm saying to myself, "Already?  I don't even remember her character's name. This is her big emotional moment and we're only 15 minutes into the film."  Lots of people were sobbing during this song, but I wasn't invested enough in her character or that story at that point to be really moved by it.

Then, halfway through the movie, the backdrop changes to a French uprising and 'introduces' a bunch of new characters.  We have a huge influx of characters that have no backstory, or names that I can recall, yet I'm supposed to care about what's happening to them.  This is an area I wish had been cut down in favor of focusing more on Valjean, Javert and Cosette (Amanda Seyfried). Also, this part of the film made me too aware of the fact that his is a French story brought to you by a bunch of English and Australian (and a few American) actors.  All of the poorer classes were even portrayed with Cockney accents.  This is something that used to not bug me, but it's the second film I've seen in the past month where you had all English actors playing non-English roles. When I see I bunch of French flags waving all over the place, but then don't hear a single French accent, it's hard for me to credit the film for attention to detail.

Another thing that bugged me about the second half of the film was that it centered around a love story of two people that have never spoken.  They simply saw each other in passing and both fell in love.  That's a bunch of crap.  It's the same issue I had with Anna Karenina.  I'm supposed to somehow identify with two super attractive people 'falling in love' simply because they looked at one another.  I wish love was that simple.

As the movie went on, it really because tedious to watch, particularly when yet another song would start by some random character.  I was like, "I get it, they like to sing all the time.  Can we please get on with the actual plot?!"  They weren't even really singing a song half the time, just some line of dialog.  This goes back to what I said at the beginning where it pulls me out of a movie to have the singing of dialog that could have just been spoken.  Singing it actually takes longer, which is one of the reasons why this movie is 158 minutes.

I didn't hate everything though.  One thing I did appreciate is that the actors actually sang their songs live while filming, rather than lipsync.  I think this made for better performances, and you got more feeling from them.  Plus, it helps when the singing isn't note-for-note perfect, as that's just not realistic.  Even the best singers hit a flat note from time to time.

The highlight of the film for me was every time Sacha Baron Cohen and Helena Bonham Carter were on screen.  They play a duo of innkeepers and thieves that show up throughout the film and Cohen in particular was hilarious.  Another standout to me was Samantha Barks as Éponine. She's not in the film much, but has experience playing same role in the West End production of Les Mis and that experience served her well in the film.

I also really liked the look of the movie.  The set and costume design really stood out.  As did the makeup, which did a good job of making a bunch of really attractive people look terrible.

While I do think the performances deserve the Oscar praise they've been getting, the movie itself fell short for me.  I think a lot of what didn't work for this film falls on director Tom Hooper.  As I've said before the story gets lost in all the volume and how bombastic it all is.  I wish he would have reigned it in a little and allowed for a little more nuance.   Normally, music is one of the things that draws feeling out of me, but here it just grew tiresome.  I have a feeling I'd enjoy the book or the non-musical version of Les Mis much more.

If you're a fan of musicals or are familiar with the story of Les Misérables, then I think you'll probably like this.  It does have fantastic performances from the cast and the movie looks great, but I think it might be a little too much for casual viewers.  It's length and loudness made it difficult for me to connect with, and the story got lost in the music.  I know the minority on this one, but I suggest it as a rental.