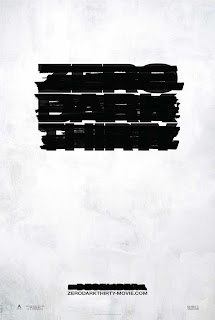 Just when I thought I was done with all of the 2012 Oscar contenders another emerges...

I had almost forgot about Zero Dark Thirty despite the fact that it was one of the year's most anticipated films.  It probably didn't help that it wasn't given a wide release until 2013, and even that date was kicked around (rottentomatoes.com shows it as Jan 11th).  A friend of mine was surprised when I told him it didn't come out on Christmas, and I have friends that saw screenings of this weeks ago.  I just found it odd that a release like this would be so under the radar.

Zero Dark Thirty spans the ten years from 9/11 right up until the operation that found and killed Osama bin Laden.  The trailers for this film make it look like it's more of an action film and military focused, but it's definitely not.  Certainly not for the first two hours anyway.  The story mainly follows the work of Maya (Jessica Chastain), an extremely driven CIA officer focused on finding bin Laden.

A majority of the film revolves around chasing down leads and trying to find a courier that will lead them to bin Laden.  To be honest, I didn't really find this part of the film to be all that interesting. There are a lot of names and jargon being thrown around, and at times I had trouble keeping it all straight.  It's the kind of film you sometimes wish you had a flow chart to refer to while watching. Unfortunately, this is the majority of the film.

That's not to say that it doesn't have its intense moments.  We open with a really brutal and graphic scene of torture involving a man with ties to known terrorists.  I've heard there are complaints that the movie has a pro-torture stance, but I didn't come away from it thinking that or that it glorified torture.  I thought it was presented in more of a matter-of-fact way where the officers believed it was the best and quickest way to get the information they were looking for.  Once that gets shut down, their focus shifts to other methods, and those other methods are what gave them the leads that eventually led to Bin Laden.  You could almost argue the opposite, that if they had continued torturing prisoners, perhaps they never would have gotten to bin Laden.

Maya eventually uncovers enough information to believe she's found bin Laden, but her superiors are not convinced.  You see a lot of stand-offs between Maya and anyone that doubts her.  This is one of the areas where I thought Jessica Chastain shined.  When she'd square off with people, you never doubted that she wasn't going to get what she wanted.

The last 40 minutes or so is where the tension in Zero Dark Thirty ramps up.  I always find it impressive when a movie can still build tension despite knowing how the movie is going to end before even sitting down in the theater.  It reminds of Argo in that way.  Director Kathryn Bigelow seems to have a knack for keeping the tension high, even when things aren't necessarily happening, or always keeping the fear that something may explode at any moment.

Unlike Argo, the problem with Zero Dark Thirty is that it doesn't have the character development of that film.  Outside of Maya, I don't think I could tell you name of any other character in the film. Even with Maya, I couldn't tell you anything about her.  Was she married?  Did she have any kids? Did she even have time for a social life outside of co-workers?  There's a point in the movie where you briefly see a wallpaper on her computer screen of her and little girl, and I couldn't help but wonder if that was her daughter, a niece, or an actual picture of Jessica Chastain.  It makes the movie a little less relatable (and entertaining) when compared to something like Argo.

I also thought the movie could have been cut down a little.  Sure, when covering ten years of actual time you have to show a lot, but at the same time, I felt that a lot of scenes didn't really go anywhere or give you much information.  I credit writer Mark Boal for being thorough, but I don't think they needed to include everything.

I love Jessica Chastain, and I'm sure she'll get an Oscar nomination, but I didn't think this was her best performance.  I can think of a few movies last year where I thought she was much better (and I'm not even talking about her nomination for The Help).  Granted, I don't think it's necessarily her fault as it's just what she was given to work with as far as the character.  Many of her early scenes in the film involved standing off to the side and not saying anything or looking serious.  She does have those good scenes when she'd confront someone, but those aren't very frequent and I didn't come away from this blown away by her performance.

Like Lincoln, the supporting cast is stacked with many great actors in very small roles.  I'm sure it's another instance of taking any role to be in a sure Oscar contender, but it's also a shame when you see an actor you like a lot and they aren't given that much to do.  Kyle Chandler, Mark Strong, Joel Edgerton, Chris Pratt, Mark Duplass and even James Gandolfini have small roles.  In the beginning of the film, I actually thought it focused more on Maya's partner Dan (Jason Clarke) than on Maya.  It's not until he takes a different role in the hunt for bin Laden does the movie focus more on her.  Not go get off on a rant, but how is Mark Duplass in everything these days?  The only person I've seen in more movies over the past year than Mark Duplass is Jessica Chastain.  I like him fine, but does even he lose track of all the films he's been in?

Zero Dark Thirty is a very good movie, but I didn't think it was a great one.  This isn't the type of movie you're going to watch over and over.  The lack of character development makes it more difficult to connect to, and the lull in the middle of the film could have been tightened up.  When you compare it to Kathryn Bigelow's last film (The Hurt Locker), or other Oscar contender's like Argo or Lincoln, I don't think it measures up to the story or performances of those films.  It's still worth watching for the intense beginning and ending though, so I still recommend it as a matinee.