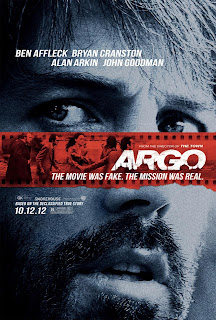 Argo is one of those stories that sounds so unbelievable that I guess it had to be true, and features a plan so crazy that it had to work.

Set during the Iranian Revolution in 1979, the U.S. Embassy is overrun and most of it's staff are taken hostage.  A small group escapes and hides in the home of the Canadian ambassador.  Due all the chaos and shredding of the records, it's not noticed that six people are unaccounted for.  However, time is running out and if they are found in the ambassador's home, it will be bad for Canada's status in Iran and likely death for the Americans.  One thing that was nice about the opening of the film is that it gives you a quick history lesson about the events leading up to this revolution.  This is a nice touch for those of you not up on your history, or too young to recall the events as they happened.

CIA specialist Tony Mendez (Ben Affleck) is brought in to evaluate the existing plans to extract them.  The flaws in all plans are quickly pointed out by Mendez, but can't think of a better plan himself.  He's later inspired when watching a sci-fi movie on TV with his son.  He'll go into Iran posing as a Canadian film crew scouting locations, meet up with Americans, train them, and then fly them all out together.

The plan is only as good as the details, so Mendez contacts a Hollywood make-up specialist John Chambers (John Goodman) to help with the cover story.  Chambers brings in successful producer Lester Siegel (Alan Arkin), who says that nobody will buy the cover unless there's a script and Hollywood actually believes the movie is being made.  You need to generate buzz.  They find a script for a sci-fi called Argo, a Star Wars ripoff.

You'd think they could gloss over this part, but this is practically a movie all to itself.  Storyboards are created, actors are hired, awful costumes are made, Hollywood parties are thrown and script readings are done.  Ads for Argo show up in Variety, and a fake movie is born.  This is also where a lot of the humor and surprising amount of fun comes from.  Alan Arkin and John Goodman are both great in their roles and are clearly having a lot of fun with it.  I finished watching Argo wanting to know more about these two and wishing they could come up with a way to give them a spin-off movie of their own.

The cast is stacked and everyone is so good that it's really hard to say that anyone stands out.  It reminded me of recent Steven Soderbergh films where you have guys that could be the leads in other films (like Bryan Cranston or Kyle Chandler) playing small roles as part of this large ensemble.  Ben Affleck seems to have that same ability to work with actors that Soderbergh has.  There aren't any throwaway characters or performances, and you manage to care about everyone despite not spending very much time with them.

Speaking of Ben Affleck, how does a guy go from being someone that most everyone barely took seriously not even ten years ago, to one of the best directors out there?  He's managed to do this in just three films, with each better than the last.  Argo is his best effort yet.  There's so much attention to detail, and you'll notice this from the outfits, the makeup, and even the overall look of the film.  It looks like something actually made back in the 70's.  Even the old Warner Brothers logo is used as the movie begins.  As the credits roll, you see side-by-side pictures of the real-life person and the actor playing them, and the resemblance between all of them is uncanny. Ironically, the one person that really didn't look at all like his real-life counterpart was Ben Affleck. It's kind of a surprise when he gets the details right in so many other areas that he didn't consider a different actor.  There's nothing wrong with the performance though, and I think he helps having a bigger name in the lead role.  Besides, Affleck was the bomb in Phantoms, yo!

Another impressive thing about the movie is how much tension there is in the film, despite knowing the outcome before the movie even starts.  I was on the edge of my seat as we reached the conclusion and there's a satisfying emotional payoff.  Members of the audience applauded even before the movie ended.

I know it's early in the Oscar season, and I'm sure I'm going to say this a few more times this year, but Argo really is an Oscar worthy film and Affleck should be nominated for his direction as well.

Argo is a truly great film that's nail-biting, exciting and is a blast to watch.  It proves the old saying that truth is stranger than fiction.  Ben Affleck also solidifies himself as one of the best directors working today.  This is one of the best movies of the year and one you shouldn't miss.