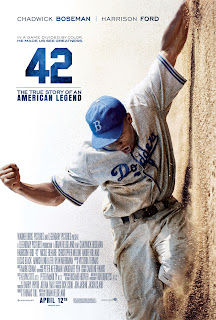 That poster makes it look like Jackie Robinson is clinging for his life as he slides off a cliff...

As much as I shudder every time I see "Based on a True Story", it's refreshing when I see it on a movie about someone and something I have more than just a vague awareness of.  42 is one such movie, about the introduction of Jackie Robinson, the first African-American player in Major League Baseball, to the (then) Brooklyn Dodgers in the mid-40's.

Branch Rickey (Harrison Ford), general manager of the Dodgers, decided for various reasons that it was time to break baseball's 'color barrier'.  He started the search for the right man, and quickly decided on Robinson (Chadwick Boseman), a star athlete for UCLA and Army veteran.  Ricky felt that Robinson had the right personality and skill set to succeed in what he knew was going to be very difficult situation.  Robinson was an intelligent and confident man, willing to speak and stand up for himself, but Rickey asked him not to do this.  The reason for this was simple enough; even if Robinson was provoked, any retaliation would be used by his detractors as examples of Robinson's inability to handle the game or pressure, or even reversing it and saying he's the one that instigated.  So, Robinson has to bite his tongue, look the other way, and do everything in his power not to fight.  You see him put up with an amazing amount of shit, and you can only sympathize.  Despite his struggles, he's (still) a hero and inspiration to many.

Like Moneyball, 42 is a baseball movie that doesn't require intimate knowledge of the game.  It's not stat driven, even though the opening monologue might make you think that for a second (and Branch Rickey happened to be one of the pioneers of statistical analysis in baseball).  Also, like Moneyball, some of the actual baseball elements were some of the weakest of film.  In some cases they felt really inaccurate.  Many scenes are shot in a way where you can't see a swing or pitch, or what you do see is awkward to the point where it's doesn't look athletic.  At the end of the film, Robinson hits a homer and you hear the announcer say the Dodgers have won the pennant, when I'm petty sure it was only the first inning.  You don't see anyone walking off the field as if it was a walk-off, and the teammate that congratulates him as he reaches home simply looks like he's ready for his at bat.  These aren't huge mistakes, but I think it's the kind stuff that purists are going to notice.

Then again, baseball is kind of boring.  They have to focus on exciting sequences of Robinson taking a walk, or attempts to pick him off first, cause that's all the game really had to offer at that point.  No steroids in baseball back then.  Yes, I'm just kidding around.  Chadwick Boseman as Robinson managed to show a playfulness when on base, seemingly taking delight in the disruption he'd cause on the basepaths.  Boseman even resembled Robinson, and did a good job of mimicking his batting stance (the actual swing looked a little off though).

Also as far as the overall look of the film, I liked that as well.  I thought they did a great job of recreating the look of some of those older uniforms and ballparks, without getting overly nostalgic about it.  I like when a period piece doesn't go out of the way to draw your attention to all the details they cram in there, and just lets you enjoy it.

I also thought there was a lot of colorful dialog throughout the film as well.  Writer and director Brian Helgeland did a good job keeping it interesting while being respectful to the man and the period.  Outside of a few things here and there, there's not a lot of chances taken though.  Overall, I would call it a very workmanlike effort.  I was surprised at the amount of humor.  It made a movie with so much weight a little easier to get through, and it seemed to quicken the pace a bit.  Some of the humor came off as unintentional though.

Harrison Ford gives one of his better performances in recent memory. He's been very grumbly and disinterested in many recent movies, but here he has a fiery passion about him.  Dr. Cox from Scrubs (John C. McGinley) has a subtlety comic performance as the Dodgers play-by-play announcer.  He was one of the smaller things I really enjoyed about the film and I think it may go largely unnoticed.  Alan Tudyk plays an opposing manager and single-handedly attempts to break Django Unchained's record for most uses of the 'n-word' in a 5-minute scene.  If it hadn't had been Tudyk playing the role, I think it would have affected me a little more in a negative sense, but the more he does it, the more it becomes unintentionally funny.  I also really enjoyed Christopher Meloni as manager Leo Derocher, but he's unfortunately not in the movie enough.  Derocher seems like a character that would make for an interesting biopic all on his own.  Even Lucas Black was enjoyable as Pee Wee Reese.

I've already mentioned a little about Boseman's performance, but I thought he did a great job as Jackie Robinson.  It's a good example of how casting a relative unknown in such an iconic role can help your movie.  If you got someone with a bigger name to play it, I think you'd have to fight the thoughts of, "Oh that's just 'x' playing Robinson."  Another standout was Nicole Beharie as Jackie's wife, Rachel.  She was definitely his rock, and you can imagine how without her, Jackie would have had a harder time dealing with all the abuse.

I think the biggest flaw of the film is that there's a very Hollywood quality about it.  I've always hated using the term "Hollywood" as a criticism.  It's a little nebulous.  With 42, I'm more referring to the overall cheesiness of the film.  Like many stories based on real events, a lot of things are streamlined or arranged to make for cleaner and more dramatic storytelling.  Maybe I'm just a little jaded from watching these types of films, where I just can't trust how much played out exactly like you see on screen or how much was done to manipulate the audience.  I also thought the sweeping score was too dramatic to the point of being distracting.  It reminded me of the score from some of the recent Spielberg films.  That's not to say that it wasn't affecting though.  There are times you're sitting in your seat wishing you could fight these people on Robinson's behalf.

42 is a good, crowd pleasing film, with lots of strong performances and interesting dialog.  You definitely don't have to be a baseball fan to get something out if it, and it's important to see what a inspirational figure Jackie Robinson was.  It's not a perfect film, but worth a matinee.