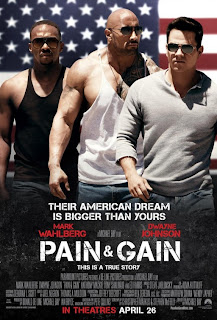 Let me get my pump on before I start writing this review...

Daniel Lugo (Mark Wahlberg) believes in fitness.  A bodybuilder and personal trainer in Florida, Daniel's grown tired of struggling and wants some of the good life.  After attending a seminar (from a very tongue-in-cheek Ken Jeong) that encourages him to be a 'doer', a plan is hatched to rob wealthy business man Victor Kershaw (Tony Shalhoub).  Daniel enlists two fellow bodybuilders Adrian (Anthony Mackie) and Paul (Dwayne Johnson) to help with 'the plan'.

Normally for a plan to work it has to be well thought out, and then executed by smart enough people that can improvise if things don't go as expected.  Neither is true here.  This is a crazy, stupid scheme carried out by meatheads even dumber than the plan.  The crazier part is that it actually works...for a while.  It also doesn't hurt their success that their mark was so unlikeable, and his story so unbelievable that not even the police are willing to help him.  Kershaw has to enlist a retired private detective (Ed Harris) to investigate, and even he doesn't take the job at first.

Pain & Gain is an example of one of those 'based on a true story' movies that falls under that 'it's so crazy it must be true' category.  However, this does take place in Florida, where it seems like every month we hear about some bizarre crime story taking place.  Throughout the film I oscillated between shaking my head at how unbelievable this all was, and then laughing out loud at it, whether it was intentional humor or not.

Usually when you see Michael Bay's name of film, you expect to see a lot boorish behavior, bad stereotypes and general shallowness.  That's certainly true here, but those were many of the things that actually worked.  Pain & Gain is probably Michael Bay's most self-aware work, and the story and setting were tailor made for his style.  They spend most of their time at the gym or by the pool, so you can expect to see a lot of skin and very attractive people, but it's not forced for a change.

It far from a great film though, and there are some flaws.  The main one being that it's a little too long.  I couldn't help checking my watch a little towards the end.  It wasn't out of any kind of boredom, but more that there are points where you think the film is wrapping up, but then continues on.  It could have been tightened up, especially where it focused too long on some of the supporting characters.

I was also a little annoyed by the camera work.  There's lots of typical Michael Bay slow motion and other jumpy camera stuff, but as the movie went on, it bothered me less.  I think all the frenetic movement helped sell the craziness of the story, and it wouldn't have been as entertaining if it was static.

There's also a ton of narration, and from every character.  This was very distracting at first, to the point where I was ready to start yelling at the characters to shut up, but this was also something that the movie grows into.  Much of this was done early on to provide depth and back story to the characters, but it was just a little clumsy in its execution.

Pain & Gain doesn't have quite as much action as you might think based on the cast.  This is made up for by the amount of humor in the film.  Again, some of this is unintentional humor where you just can't help but laugh at how stupid these guys are, but there's actually a lot of very funny dialog.  I'm sure the screenplay by Christopher Markus and Stephen McFeely in some ways kind of wrote itself.  How could you not get humor out these people and situations?  The dialog did have some additional punch to it though, and I found myself laughing way more than I expected.

I thought the trio of Wahlberg, Johnson, and Mackie were all great.  You never really have a reason to like any of these guys, and they'll all pretty despicable for the most part, yet their performances keep you interested.  I've often been hard on Mark Wahlberg for being too serious, but this recent focus on more humorous roles is really working, and thought he was great.  The real stand out, once again, was Dwayne Johnson.  His character is a ex-con, turned Jesus freak, but then reverts back to his cokehead ways as the film goes on.  It's a hilarious transition and most of the funniest moments and best lines are his.

What can I say?  Sometimes stupid works.  Pain & Gain is everything you'd expect out of a Michael Bay film, but this time he's in on the joke.  It's an unbelievable, but somehow true story, with great performances and just the right amount of humor to make it fun to watch.  This is a great one to catch with friends, and maybe have a few cold ones beforehand.  I give it a strong matinee recommendation.