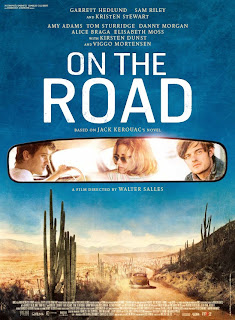 I have bongo music stuck in my head now...

I've never read the On the Road, nor have I ever had much of an interest in Jack Kerouac (whom the main character of Sal was based on), but I'm generally willing to give anything a shot.  The only thing I'd heard about On the Road going in was that it often considered to be a unfilmable book, and there had been several attempts to make this over the years (mainly by Francis Ford Coppola).  When I hear unfilmable book, I think of titles like Cloud Atlas or Watchmen, but the the difference with those two is that they were much more ambitious films, with many complex characters and covering longer periods of time.  Maybe something got really lost in this adaptation of On the Road, but I didn't find that to be the case here at all.

On the Road focuses on a small group of twenty-somethings over a few years in their lives from the late 40's to early 50's.  The story primarily follows the characters of Sal Paradise (Sam Riley) and Dean Moriarty (Garrett Hedlund).  Sal is a struggling writer who yearns for more freedom, and Dean (who was already an ex-con when they meet) is a fun loving guy, who's pretty much up for anything, or anyone.  Dean is also quite the ladies man, shacking up with Marylou (Kristen Stewart) and Camille (Kirsten Dunst).  As the title suggests, they spend a lot of time on the road, meeting people, partying and having adventures.

If I was in my early 20's, still in college and trying to figure out what I wanted to do with my life, something like what you see in On the Road would be fun to experience.  However, it's not particularly interesting to watch on screen, especially as you learn more about the characters and find that there's really not much to like about them.  Maybe this is what got lost in the adaptation, but I found all of these characters to be pretty shallow, and in the case of Dean I found him to be kind of a scumbag.  He's married and has a newborn, but he'd rather go out on the road and have more drugs and sex.  His friends seems to idolize him, rather than call him out on his behavior, or maybe suggest he stay home with his family.  Would you support the antics of your friend that's a deadbeat dad?  Instead, they share long embraces each time they meet up, as if years have passed since they all last saw each other, but it's only been a few months at a time.

The lengthy feeling between meetups is likely due to the fact that On the Road is pretty slowly paced.  At one point, I checked my watch thinking the movie must be close to over only to see I was only at the one hour mark.  I still had an hour left to go!  At this point, I felt like the movie was a bit of a repeating loop, because you just see them do the same things over and over again: more driving, more sex, and more partying.  It feels routine and less interesting as it goes on.  Even when there are attempts to show you other sides of their characters you don't come away with a better understanding of them, but rather liking them less for their behavior.

That's pretty much all I got out On the Road, which I realize may be missing the point of the book, but I'm reviewing what I saw on screen, not a book I've never read or a film's faithfulness to it.  I'm just calling it like I see it.

I liked the performances for the most part, but I wonder if I would have had an easier time identifying with the characters if maybe they had gotten more familiar actors.  Kristen Stewart's not exactly a name that gets my butt in the theater.  I actually didn't mind her performance here, and thought she had some life about her for a change.  She's actually not in the movie all that much, which may be why I didn't have much of an issue with her.  I'm only seen Sam Riley in 13, and thought he was adequate.  Despite not liking Dean at all, I thought Garrett Hedlund's performance as him was strong and showed a lot of charisma.  You can see why people would initially be drawn to him.  We also get a very eclectic cast of bigger names playing very small roles.  You'll see people like Amy Adams, Terrence Howard, Elisabeth Moss, and Viggo Mortensen pop-up in random roles throughout.

It's a good looking film with lots of picturesque scenery.  As far as a period piece, it felt accurate and faithful to the time.  There's also a sense of speed when driving that you really feel, and I think that's where Walter Salles direction really came into play.  You also experience all the seasons they go through.  When you see them driving in the hot sun, you can't help but notice how sweaty and dirty they are.  I can only imagine what the inside of that car smelled like.  I hope they stopped to shower on their trips.

I was annoyed by the Beatnik, bongo music I heard throughout.  They say that Beatniks were the original hipsters, and after watching On the Road I can see how there are some similarities, and I dislike their style and music as equally as modern hipsters.  I've heard that Kerouac's book has been very influential and praised for it's style, but I don't think Jose Rivera's screenplay captured any of that.  If there was any energy to Kerouac's writing, that's all been sucked out of the film.

On the Road is a good looking, well-acted film, but for a story about living life, it sure felt lifeless.  There's no passion to it, and I didn't like any of the characters as they were portrayed.  It's way too long for what it is, and would recommend you take the two hours you could spend watching On the Road to go out and start an adventure of your own.