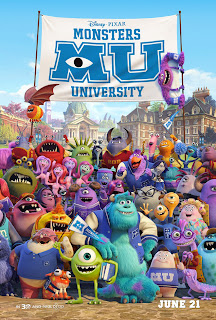 What is it with rehashes of Revenge of the Nerds lately?  Monsters University is the second movie I've seen in the past month (The Internship being the other) that borrows heavily from Nerds.

Mike Wazowski (Billy Crystal) was inspired at a young age to become a scarer.  He studied harder than everyone and eventually got accepted to Monsters University.  Despite knowing the ins and outs of scaring, Mike has a lot of doubters that don't believe he has the innate ability to be a good scarer.  Jake Sullivan (John Goodman), on the other hand, comes from a well known scaring family and has all the physical attributes you'd want to have.  Mike and Jake start out at odds, competing to see who's the better scarer.  Sully thinks Mike just doesn't have what it takes, and Mike thinks Sully is just relying on his family's name and natural ability to get by.

Their competition gets the better of them though, and both are eventually kicked out of the scare program by the Dean (Helen Mirren).  Their only chance back in is to win the Scare Games, a series of contests that pit all the various fraternities and sororities against each other.  Mike and Sully are forced to put their differences aside and join the fraternity full of castoffs in order to compete in the Games.  Nobody thinks their fraternity has even the slightest chance, but Mike thinks he can whip them into shape.  Sounds all too familiar, eh?

Even though it follows a familiar format and contains familiar themes, I still enjoyed Monsters University.  This is one of those times where I wasn't bothered by all the reused tropes and plot elements.  I tend to enjoy underdog stories, even though they tend to be predictable.  It's also a prequel that works.  I liked seeing how Mike and Sully started out and eventually became the friends we know from Monsters, Inc.  It also serves to make them both more sympathetic characters when you see the issues they had to overcome.  Although one of the issues with doing a prequel so long after the fact is that many of the characters we spend time getting to know in Monsters University aren't mentioned or seen in Monsters, Inc.  There are a few common characters like Randy (Steve Buscemi) though.  On the other hand, it really won't matter what order you watch either of these films.  There's nothing really spoiled or ruined by watching them in a particular order.

If they ever do decide to do a third film, I'd like to see them do something far in the future.  Maybe base it around Boo as a college student herself, whose long forgotten her adventure with Kitty and and Mike Wazowski.

The humor is pretty standard and definitely geared towards the family.  Most of the families sitting around me all laughed at various points.  I didn't find it particularly funny myself, but not because it was childish.  Just not quite enough bite for my tastes.  However, there's a great sequence at the end that fans of horror films will really appreciate.  I don't know which of the three writers wrote that section (Robert L. Baird, Daniel Gerson, and director Dan Scanlon), but it was a smart sequence that was best part of the film for me.

As you'd expect with a Pixar film, the animation is top notch.  When you compare this with Monsters, Inc. it really is amazing to see how far it's come.  There are times where things are so realistic looking - particularly with the short film before the main feature - that you may think real sets are used with the characters added in after.  It truly is beautiful, and worth watching just for the animation if that's your thing.

Monsters University is one of the rare examples of a prequel that's on par with original, and I actually enjoyed it a little more than Monsters, Inc.  While it's definitely not Pixar's best work, and dives a little too deep into familiar territory, it's still a fun and engaging film that the whole family can enjoy together.  Easy matinee recommendation for this one.