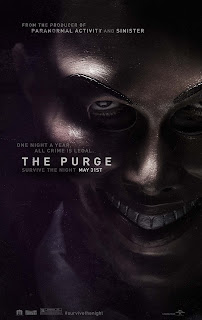 In the year 2022, unemployment is down to 1%, crime is at an all time low, and the economy is booming again.  There's a catch for all this prosperity though: once a year, from 7 PM to 7 AM, all crime is legal.   "The Purge" allows for members of society to get all their pent up anger, frustration, or whatever out.  You don't have to participate though, and many just bunker up in large homes with elaborate security systems.  One interesting point of the film is how the poor, the homeless, etc. don't have the means to protect themselves and are usually the most likely victims of "The Purge".  I guess it's easy to eliminate unemployment and homelessness if the wealthier can just kill them off once a year, eh?

It's a shaky premise, but I can accept it as long as they commit to it.  The problem is that too many things are referenced that aren't explained, and these ideas aren't explored enough.  Like they constantly make reference to the New Founding Fathers, but never elaborate on this.  And this is set is just 2022?  Society has crumbled such a short period of time to allow for a different form of government or something?  This isn't the first Purge either.  It's clear that his has been going on for at least a few years.  The points they make about the poor are barely glossed over, and are thrown by the wayside once the story decides it wants to be a home-invasion thriller.  I know I'm overthinking it a bit, but these are the things that I can't help but ponder while watching, especially when the characters are so flat and uninteresting.  Sometimes a movie's flaws aren't apparent until you reflect on it afterwards.  Other times, a movie slaps you in the face with them. The Purge made me feel like I spent an evening at a bar delivering bad pickup lines.

Oh yes, there will be spoilers, and I apologize if this post reads as a little ranty.  This movie just bugged the hell out of me.

James Sandin (Ethan Hawke) is an wealthy security system salesman that's clearly benefit from this new society with all the need for ultra-home security.  He has a loving wife (Lena Headey), and two kids - older daughter Zoey (Adelaide Kane), and younger son Charlie (Max Burkholder) - that right off the bat you know are going to cause problems as the movie goes on.

We barely meet the family before "The Purge" begins, and shortly after that a bloody stranger (Edwin Hodge) pleading for help is let in by his son.  I had a hard time getting my head around why the son would have the ability and passcode to disable the security and let this guy in.  You'd think a security system owned by the very guy that sells them would have some built in safeguards or something, right?  He should have the top of the line model, too.

Shortly after letting the bloody stranger in, a masked group of weirdos shows up and asks James to give up the stranger.  If they give him up, they'll leave the Sandins alone.  This lynch mob has reinforcements on the way, and assures James they'll be able to get into the house.  The leader of this group (Rhys Wakefield) looks like a combination of Ralph Fiennes, John Malkovich and Crispin Glover, but somehow creepier looking.  The first thing the mob does though after giving this ultimatum is cut the power to the house.  Um, hey idiots, did you consider that the motorized door barricades might require power to operate?  Also, the stranger is now hiding, so without lights, he's proving difficult to find, as the house is quite large.  This is made more frustrating by the fact that James never communicates to the mob's leader that it might be easier to find the guy if they could use the lights.  Also, the idiot son that let the stranger in is continuing to help him hide, and seems to have zero guilt about the danger he's put in family in.

Time runs out and the mob is able to get into the house.  This also bugged me because they were able to simultaneously pull every heavy metal door off the house.  How did they even attach the chains to all the metal doors?  Did they all have convenient hooks on the outside?  Anyway, despite not knowing anything about the home, they run around making all kinds of noise without any care in the world.  Aren't they concerned about charging into a home where the occupants are likely armed (and they were), don't know how many they are up against, and don't know anything about the layout of the house?  Why the Sandins weren't hiding in strategic points in the house waiting for them, I don't understand either.  I also don't get how this security system wasn't designed with any defenses or ability to shoot at trespassers while they're still outside.  The Sandin family should have been able to take out half of these guys before they even got in.

Oh, I almost forgot.  Just as they let the bloody stranger in, we see that Zoey's much older boyfriend (Tony Oller) was hiding inside the house.  He tells Zoey he wants to take advantage of the lockdown to confront James and convince him he loves his daughter.  Only when he goes to do this, he immediately pulls out a gun and attempts to shoot James, 'cause you know, the best way to impress your girlfriend is to kill her dad, right?  The dumb boyfriend gets shot, and for some reason his daughter runs off with him as if on his side or protecting him.  She's upset when he dies.  Huh?  Your boyfriend just tried to kill your dad.  Do you even understand what is going on?

Ethan Hawke does get to kick ass a little during one scene, so that part was cool.  The movie takes a lot of predictable turns otherwise.  The Purge is guilty of one pet peeve of mine where when a bad guy is killed and they don't take his weapon or ammo.  I can't stand that!  The bloody stranger is also seen wearing dog tags, so you can assume he was in the military.  He likely has some weapons training, and may be able to help you defend the house, but that never even comes up.  However, the most irritating thing about the film is that there are three distinct times (which I won't spoil) at the end the film where they could have done something really cool that would have at least let me leave on a high note and somewhat satisfied, but none were taken.  It just ends and everything goes back to normal.  Whatever...

Written and directed by James DeMonaco, The Purge is a complete misfire.  This is something that would have worked much better if it was under an hour and you didn't have as much time to pick it apart as it happened.  The setup is an attempt at social commentary, but it's not developed.  For example, they show that despite living in a affluent, gated community, the Sandin's neighbors appear to be deeply resentful of their success and how they have more than they do.  Well, maybe you guys should have gotten into the home security business then.  It's not like Sandin invented "The Purge" as a scheme to get rich.  He saw an opportunity to make money and took it.  He doesn't even own the company he works for.  He's just an employee.  It's not like he's doing anything illegal.  He has too much so we don't like him!  Jealousy is an ugly color, bank-farter.

Then, I thought about the actual Purge and how it's supposed to create some catharsis, post-Purge, but are you really creating a better society when you're basically rewarding people that are harboring deep psychopathic urges or need to commit violent crimes?  Do you really think one night is going to get it completely out of their systems?  Don't you watch Dexter?  The Dark Passenger doesn't just go away.  I think it would have been interesting to show that after a few years, law enforcement started secretly killing anyone they saw participating in "The Purge", removing those with violent tendencies from society.

The Purge is a mess of a film, and I wish I could purge it from my memory.  The setup has a kernel of an interesting social commentary, but it's dropped as the film devolves into a lame home-invasion thriller, relying on cheap jump scares, and typical conventions where characters do incredibly stupid things.  Finally, it has a terribly unsatisfying ending.  I could see this being slightly more effective while watching at home, but it's such a stupid film that it's really not worth the watch.  If you must see it, save it for rental, but otherwise, there's no need to watch this.