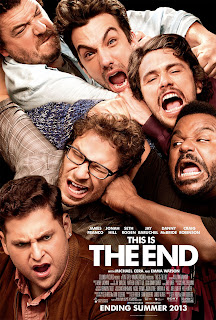 If this really is the end, I can't think of many better ways than being trapped with a group of your best friends, or a bunch of funnymen.

This'll be a quick one as there's not much to say about the film.  Not that This Is the End is a bad movie, but it's because there really isn't that much to the plot.  Even that's not really a bad thing as sometimes that's not the point.  It's clear that writers, and first time directors, Seth Rogen and Evan Goldberg just wanted to make a fun film with their friends that exists strictly to make us laugh.  That's This Is the End in a nutshell.

There's so little to the story, that they didn't even bother with creating characters.  All of the actors are playing exaggerated versions of themselves.  In some cases extremely exaggerated versions of themselves - I'm looking at you Michael Cera - to hilarious effect.  I enjoyed the fact that I could take the night off as far as paying attention to character names.

Jay Baruchel arrives in L.A. to visit Seth Rogen.  They've been friends for a long time, but Jay's not a big fan of L.A., so he doesn't visit much.  Seth wants Jay to bond with his group of friends more, so they head to a party at James Franco's new house.  Much like you'd expect in Hollywood, the party is full of celebrities, and while it's funny to watch, you'll spend as much time seeing how many cameos and people you recognize.  Jay and Seth step out for cigarettes, and all hell breaks loose, literally.

They get back to Franco's house, where they haven't noticed what's going on around them yet, but it quickly catches up.  The remaining group - Seth, Jay, James, Jonah Hill and Craig Robinson - board up in Franco's house while they wait for rescue.  Jay believes this is the apocalypse, while the rest think he's overreacting and it's just a bad earthquake.

That's all there is to it.  This Is the End is all about the frenetic pace and rapid-fire jokes.  This is one of those films where the laughs happen so frequently that many times the laughter of the crowd drowns out the next thing said.  Multiple views are likely going to be required.  However, I'm betting this is a release that will have a nice unrated cut.  If not, the deleted/gag reel on the Blu-Ray is going to be insane.

Anothing thing I loved about the film is that most of the best moments of the film are not spoiled by the trailer or commercials.  Rogen stated this in an interview recently, which I was skeptical of, but he was not bullshitting us.  Hallelujah!  It's so refreshing to see a movie that doesn't ruin every gag before you've even seen it.  Part of the reason is that many of the funniest moments are not suitable for trailers or commercials, but at the same time I didn't find the movie that crude.

A majority of This Is the End felt like improv, and you're watching a bunch of friends ripping on each other.  Considering the company that's a good thing.  These guys have done plenty of shitty movies that give them lots of ammo to make fun of.  They probably filmed hours of material and then realized they need to advance the plot, or something, so they started editing the film down to keep the runtime bearable.  About an hour into the film my friend finally leans over to me and goes, "I think that's the first plot related thing they've done."  Despite that there's not much of a story, it never really bugged me.  I was too busy laughing.  I've said recently that this is a weak year for comedy, but this is the funniest film I've seen this year.  I feel like I'm giving a lot of back-handed compliments here.

Rogen and Goldberg have hit home runs before as far as writing, so it's natural they step into directing the same genre.  I'm happy to say they seem to have the same sensibility directing as they've had when writing films like Superbad or Pineapple Express.  They know who their audience is and taylor the movie to that crowd.

I know I'm not giving you much to go on, but This Is the End is the easily the funniest film of the year.  I said last week that The Internship was going to be the most successful comedy of the summer, but this deserves that title.  If you're a fan of films like Superbad and Pineapple Express, then this is going to hit with you.  Full price all the way, and definitely a film that lends itself to an 'altered state' with some friends.