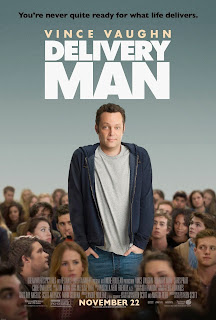 A few years ago I heard about a story where there was some delivery guy or truck driver that actually had like 100+ kids in various cities around the country.  I though that's what Delivery Man was going to be about, which probably would have been a more interesting story. It turns out I can't find any links to that story, so I could have imagined it for all I know.

What I didn't realize was that Delivery Man is an American remake of  the French-Canadian film Starbuck, both directed by Ken Scott, and co-written with Martin Petit.  Why "Starbuck"?  It's the anonymous name used by David Wozniak (Vince Vaughn), when he made a large amount of sperm donations when he was younger.  The choice of name struck me as odd as David didn't appear to be much of a coffee drinker, nor a Battlestar Galactica fan.

Due to some issue at the sperm back, David's sperm was used repeatedly and learns that he is the biological father of 533 kids. A large group of these kids are suing to find out their father's identity, and David is given a file with their profiles.  David now has to decide if he wants to come forward.  Also, his girlfriend (Cobie Smulders) reveals she's pregnant, but isn't sure David would make for a good father.

David is that cliched screw-up that hadn't grown up yet, and always seems to be in some kind of mess.  Looking for some way to prove his value as a father, and an adult, he starts reviewing the profiles of his various biological children to check in on them and help them where he can.

He helps out a few of these kids and starts to feel better about himself.  He even views himself as a bit of a guardian angel.  These were some of the better moments of the film.  Unfortunately, many of these kids are not really well developed, so outside of one or two of them, you don't get invested in them at all.  They aren't much more than a single character trait or profession.  The main kid that they do focus on was a creepy guy that you wouldn't want to spend a lot of time with.  Even David talked about how much he was annoyed by him.

One of the issues I had a hard time wrapping my head around was what the actual conflict was.  The kids were only suing to learn his identity.  They didn't appear to be mad at him, or want anything from him financially.  It's mainly an issue of confidentiality, which David never really expresses that he has much of an issue with.  The only real problem comes from the fact once the story gets in the news, he's vilified as some kind of creep, but again, this isn't something he's at fault for.  It's the sperm bank's fault.  Also, for much of the film it's never a matter of if he's going to come forward, but when.  The way he chooses to do it I thought was pretty terrible considering the relationship he had with many of them by the end.  If I were some of the kids, I probably would have been upset by the way he revealed himself.  Oh, sorry, I guess that's a bit of a spoiler...if you couldn't tell that was going to happen during the opening credits.

Another big issue with the film is that it's really not that funny.  Most of the jokes fall really flat, and there's and overall lack of wit or punch to anything.  There's one particular gag that's repeated to the point where it gets annoying, and it wasn't even funny the first time.  I was disappointed that Bobby Moynihan as David's brother (really, you're trying to sell me on Moynihan being related Vaughn?) didn't get more to do, and it seemed like there was a missed opportunity to have more banter within the the family.

It also suffers from lack of focus and plot threads that don't really go anywhere.  There's a thread that persists throughout regarding David owing a large amount of money to some Russian loan sharks.  When this is finally resolved, it has no bearing on the film's conclusion, and you wonder why it was in the film at all.  It was a pretty pointless inclusion.

Vince Vaughn is his usual charming self, even if is trademarked energy isn't there.  He's much more subdued than what we're used to seeing, and I'm not sure that was the best direction.  The film needed a little more life and energy.  On a side note, in a few early scenes I had to wonder if Vaughn was dealing with some back issues.  As someone that's had his share of back issues over the years, I recognized the labored walk of someone dealing with a sore back or back spasms.  As much as I like Cobie Smulders, she's not given much to do here and felt like a wasted casting.  Chris Pratt had a few funny moments towards the end, but he's better than the material given to work with, too.  I just don't understand why you'd get comedic actors from successful TV shows and then not give them anything funny to say or do.

Delivery Man is a middle-of-the-road, sorta feel good, family film that fans of Vince Vaughn will still likely get some enjoyment out of.  It pretty much gets by on his charm.  I admit that I liked the end, but I'm a sucker for sappy endings.  It's one of those films where I can't say I really liked it, but can't bring myself to hate it either.  It's definitely not something you need to rush out and see in the theater, and is better suited for rental or cable.  In fact, if you were flipping channels and caught this you'd probably sit through it and not feel like you totally wasted your time.  Ultimately, it's pretty forgettable though.