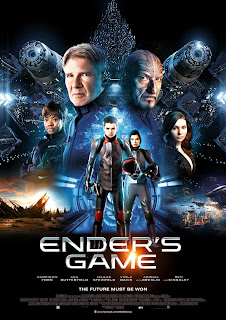 I could have used a little more Death Blossom.

I haven't read Ender's Game.  Hell, I was only vaguely aware of its existence the first time I saw the trailer, so if you're looking for a comparison of the book to film adaptation, you'll need to look elsewhere.  I've also heard people say it was unfilmable, which didn't seem like that case while watching.   Maybe at the time of writing it was.  Modern technology sure seems to be making a lot of these supposed unfilmable movies a reality lately.

In the future, Earth is attacked by an alien race known as the Formics.  They were beaten back, but humanity has been preparing for their return ever since.  Children a trained at a young age to find the best candidate to lead the fleet.  Why children?  They learn and adapt quicker, are more adept at thinking outside the box, and let's face it, they are better at playing video games.  Ender Wiggin (Asa Butterfield) is recognized early by Colonel Graff (Harrison Ford) as the strongest candidate.  He's put through a series of simulations and games to test his strategy and leadership abilities.  He quickly rises through the ranks and eventually gains the respect of his peers.  With the next battle likely determining the fate of the human race, will Ender be ready in time and handle the responsibility and pressure being put upon him?

At it's heart, Ender's Game feels like one of those classic stories of a child being told there's greatness within him and slowly gaining the confidence to realize that potential.  The kid in me found it easy to identify with and go along for ride.  While PG-13, I thought about how much my 8-year-old nephew would have enjoyed it, and I do think it's suitable for kids in that age range.  It helps that a lot of what's effective about Ender's Game is seeing how Ender deals with the consequences of his actions.  Not being familiar with the story, I was a little surprised with how it played out and thought it was a nice twist.  I've heard from some that the book is smarter, but when isn't that the case?  I also thought there was a nice message about standing up to bullies.  Bullies should also be on notice, as you never know when the guy you're picking on knows all your weaknesses and is ready to mop the floor with you.

Although considering the fact that the boy that saves the day was the best at games and video game simulations, you might want to avoid giving your kids the ammo that allowing them to play more video games may mean the difference between life and death in the future.  I do think it's interesting that book was written back in 1985, and had a pretty forward thinking view regarding the adaptability of children and how it relates to playing video games.  Maybe I'm reading a bit too much into that though.

The timeline felt a little rushed with how quickly Ender was progressing through the ranks.  It seemed like just a day or two would go by before he was being promoted again.  I remember at one point seeing a readout saying they had 20-something days before the next attack, but it wasn't quite clear to me.  Did only just a few weeks transpire or did this take place over a few months?  If it was a really short period of time, it might have helped to have some kind of throwaway line about accelerated learning technology or something.  However, there are a few scenes involving space travel where you can see they were in stasis, which would imply that more time was elapsing, so it felt like a few steps were being skipped in the transitions that might have explained it better.  Having said all that, I felt Ender's Game was paced well and wouldn't have minded if it was a few minutes longer.  I thought Gavin Hood did a good job with the material.  I can't comment on how faithful this is to the book, but after watching X-Men Origins: Wolverine, I'm just happy this wasn't a train wreck.  It certainly seems to lend weight to the belief that X-Men Origins: Wolverine was a case of massive studio interference.

I enjoyed the special effects and the overall look of Ender's Game.  It felt sufficiently futuristic without having technology that seemed impossible or way too ahead of its time.  I really liked the design of the Formics ships and worlds.  It had a very organic, alien look, and I was reminded of the Yuuzhan Vong from the Star Wars Expanded Universe.  Thankfully it's not in 3D, so you won't have to contend with that.  I did see it in IMAX, and while I always enjoy the format, you don't need to wait for IMAX as it's not that big of a deal.

I also enjoyed the performances.  The film is anchored by Asa Butterfield's sympathetic portrayal of Ender.  Let's face it, had they cast the wrong kid, or you don't buy into his performance, then the whole film kind of falls apart.  Butterfield's had a pretty strong start to his career and I think we can expect to see a lot more from him.  After a disappointing performance in the recent Romeo and Juliet, Hailee Steinfeld bounces back with a stronger performance here, and I thought she good chemistry with Butterfield.  It was fun to see Moises Arias' antagonistic turn as Bonzo, whom I totally thought they were calling "Bonesaw".  Wouldn't that be such a natural nickname for someone named Bonzo though?  Ben Kingsley and Viola Davis are also very good in their limited roles, but I'm convinced neither actor is capable of delivering a bad performance.  Finally, I was happy to see Harrison Ford not mailing it in for a change.  This is the most invested I've seen him in a long time, and you get the feeling he must have really cared about the story.

Ender's Game is a fun adventure that'll appeal to the kid in you.  It's well-acted, has great effects, and the whole family can enjoy together.  It's not a game changer, or something that's gonna make you want to throw out your copy of The Last Starfighter, but there's definitely enough entertainment value that makes it worth a watch.  I recommend a matinee.