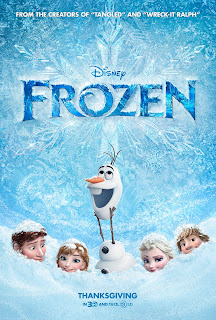 The cold never bothered me, either.  That line will make more sense after you see Frozen.  Despite being a California native, I've often wondered if I was meant for colder climates.  Then again, spending much of my youth stocking a cooler for hours at a time might have thickened my hide a bit.

Before I get started, allow me to rant for a second.  Dear parents, if your kids cannot get through even a two minute trailer without screaming out loud several times (and not even necessarily at the images on the screen), perhaps you should wait a few more years before bringing them to the movies.  It's not fair or courteous to the people sitting around you.

Before Frozen began, we're treated to a clever, "meta" short film framed around a classic Mickey Mouse cartoon.  It develops slowly, but once its 'twist' is revealed it was a lot of fun to watch.  It's no Paperman, but still a good short.

In just the opening scene of Frozen I realized I was in for a much different movie than I thought.  Based on the trailer, I expected some corny movie about a snowman and a reindeer (it's interesting to note that neither character shows up until around the halfway point).  Instead, Frozen is a classic story about a princess and true love.  It's a familiar and somewhat cliched story.  You could call this a weakness, but the classic versus cliched debate is splitting hairs in this case.  Both written and directed by Chris Buck and Jennifer Lee, they've added some twists and updates that worked very well and kept it fresh.  Frozen also has very strong central themes that make this the kind of film that parents will actually encourage their kids to watch.

Frozen is about two sisters, Elsa and Anna, who've grown apart over the years, and have been isolated from the outside world.  There's much more to their relationship, but I don't want to spoil anything since I was so pleasantly surprised by how the story developed.  I want you to be able to enjoy it the way I did.  I'll give you this one little tease to go on though.  If your favorite character from the X-Men is Iceman, with maybe a little bit of Emma Frost thrown in, then you're going to be in for a treat.  During many scenes in Frozen my mind would wander thinking about why they haven't been able to accurately portray Iceman in an X-Men film yet.  Future X-Men films may want to use Frozen as a template, because they really nailed it.

While I'm not exactly the biggest fan of musicals, I really loved the songs in Frozen and it's one of the best aspects of the film  They were cute, clever and funny.  By the second song, I was already in love with Frozen.  Yes, you could say that Frozen managed to thaw my icy heart.  Elsa's (Idina Menzel) defining song "Let it Go" is a highlight of the film, and the animation was perfect for it.  I can still hear the song in my head.  I wouldn't be surprised to see Oscar nominations for Robert Lopez and Kristen Anderson-Lopez for their original songs.  I expect that many copies of the soundtrack will be purchased this holiday season.

The animation is fantastic and some of the designs and scenery will likely evoke thoughts of things like Lord of the Rings or even Game of Thrones.  The character's look was also very appealing.  Despite all the ice and snow, it's still very vivid and colorful.  I actually thought the 3D was very good as well, and it doesn't get in the way.  I still don't think you need to make huge effort to see it in 3D, but it's not a complete waste if that's all that's available to you.

Frozen also features great voice acting.  I couldn't place the voice for Anna for much of the film, and was surprised to see it was Kristen Bell.  I never really noticed her voice before, but was impressed with how warm and effortless it was, and it turns out she's a great singer, too.  The entire cast is excellent and I applaud the filmmakers for not going with a bunch of big name actors, but rather ones whose voices fit the parts better.  I was very impressed with Jonathan Groff and Santino Fontana, as Kristoff and Hans respectively.  Josh Gad is perfect as Olaf the snowman.  I was surprised to see Alan Tudyk's name in the credits, and he's proving to be quite the chameleon as a voice actor.  However, the prize goes to Idina Menzel as the hidden gem here.  He voice is absolutely amazing!

Frozen is a classic Disney musical that everyone can enjoy.  It features gorgeous animation, great songs and wonderful voice acting.  It's clever, funny, energetic, and has the kind of heart I normally would expect from a Pixar film.  Disney has really stepped up it's game with their animated films in the past few years.  This is my favorite animated film of 2013 and was an absolute joy to watch.