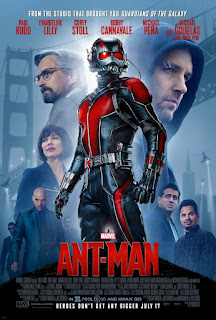 One of the funnier Marvel films to date. I can see why James Gunn gave it such high praise. It's one of the lightest in tone of all their films. I laughed out loud during Ant-Man almost as much as I did during Guardians. It's a shame I saw this on such a small screen with only about 15 people.

Ant-Man is also another good example of great casting (something Marvel seems to keep nailing). If you don't cast someone as funny and charismatic as Paul Rudd in the lead, it's likely the whole film doesn't work. I'm a huge fan of Michael Pena and he worked great as additional comic relief. Evangeline Lilly was great as well. It's ironic that she's an actress that's actually athletic enough to pull off a superhero role, but yet still doesn't get to play one. It looks like she might get her chance soon though.

I'd say Ant-Man's biggest fault is that it's yet another origin story, and it's pretty formulaic as far as that goes. Also, in a lot of places it feels like it exists just to bridge some of the other Marvel films together. Fortunately, the bridging is done in an entertaining way, and some of the flashbacks and cameos made me geek out. Ant-Man doesn't require that you've seen all the other movies or are super familiar with the MCU. It's pretty accessible compared to some of the other MCU films.

I don't know the reasons why Edgar Wright left the project, and one can only imagine how this would have turned out had he stayed on. You can see his fingerprints on the final product in a few places.

I did see this in 3D, which of course, was a total waste of time and did nothing for the film. It was unfortunately my only option, but I advise you to skip it if possible. Visually the effects were good though.

There are two post-credit scenes, so get comfortable during the credits if you don't want to miss them.

Ant-Man isn't the strongest of Phase II, but it's one of the most fun. Those looking for some late summer entertainment won't be disappointed. Totally worth the price of admission.