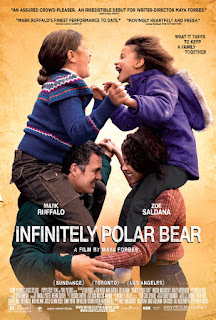 I was a little leery of seeing Infinitely Polar Bear. If not given the right tone or touch, it could be too heavy or hard to watch. I'm also on the fence about Mark Ruffalo, it's not that I don't like him, but he has that thing where it looks and sounds like he's chewing on the inside of his lip and that puts me off a little bit. Maybe that's just me though.

The basic premise is that Mark Ruffalo's character is manic-depressive and has had several breakdowns. He tries to reclaim his life and family by attempting to take care of their two daughters while his wife, played by Zoe Saldana, goes to school to get her MBA. It's Mr. Mom, but with bi-polar disorder.

Fortunately, Infinitely Polar Bear has a much lighter tone than I expected. Much of time this feels like more of a dark comedy than a drama. This is in large part due to Mark Ruffalo's brilliant, complex and manic performance. I think this might be my favorite performance of his (even surpassing Begin Again). Just as great are his two daughters, played by Ashley Aufderheide and Imogene Wolodarsky (who happens to be director Maya Forbes' daughter). Both are newcomers, but you wouldn't know it as they are so fantastic. It's interesting to see such great performances from young actors. At times, they're the ones who are the adults and struggle with Ruffalo acting like a child. It can be hard to watch Ruffalo's character self-destruct and be a general mess. Their frustration is real, but so was their love and it really got to me emotionally by the end of the film. I also want to mention this is probably the best dramatic role I've seen Zoe Saldana in. The story is just the four of them, and they carry the film admirably.

While Polar Bear is rated R, it's mainly because of language. This is a time where I really don't see why it couldn't have been PG-13. Why? Because a movie goes over the quota for certain words? It's stupid, antiquated and I don't think this should affect that rating that much these days. It being rated R might discourage people from taking their kids, but I actually think this is something you should take your kids to see, provided they are mature enough.

Infinitely Polar Bear isn't depressing or a downer, and I actually think that most people will ultimately enjoy and have fun with it. Despite its lighter tone, it has its poignant moments and worth seeing just for the performances. I actually thought it was a good date movie. Infinitely worth a matinee.