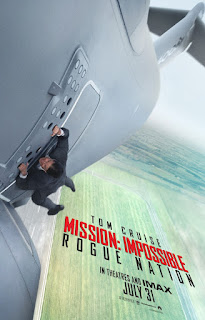 Hard to believe we're on the fifth Mission: Impossible movie. It's harder to believe that they're any good still. What's with some of these action series getting better with each sequel? This shouldn't be happening.

Anyway, so what's Rogue Nation about? You know, typical spy crap. Some underground organization wants to do something, and it's up to the other underground organization to stop them. At least it's a little more grounded in that the villain's goal seems somewhat realistic and don't involve some crazy weapon of mass destruction thingy. There is a device everyone is after, but they practically call it a MacGuffin, as if to throw their hands up admit that it's meaningless. It's also nice when the villain is someone that the hero actively admits he's overmatched by. Raises the stakes a little bit.

The action scenes were solid, if a bit uninspired. It's entertaining, but nothing you haven't experienced before. However, there's a motorcycle chase that might be the best I've ever seen in terms of point-of-view and sense of speed. It appears Cruise did most of his stunts again and you have to applaud the guy for the dedication and willingness to put himself at risk. You know that airplane scene that you seen in all the commercials and trailers? That's the opening scene! It's not even relevant to the plot. Just some cool shit to start the movie with.

Rogue Nation brings back the primary cast from the Ghost Protocol (and other MI films), with the exception of Paula Patton, so there's continuity as far as that goes. You won't miss Paula Patton though, as the one thing most people will come away with is how badass Rebecca Ferguson is. A lot of people, myself included, praised Ghost Protocol for Patton's character being more than just window dressing, but Ferguson's blows her out of the water and it's not even close. She's tough, cunning and sexy. Other spy/action films should take note. Tom Cruise, is well, Tom Cruise. What else can you say about him at this point? Simon Pegg provides the comedy relief and I enjoyed that Rogue Nation had a sense of humor and it was peppered by funny moments.

Oh, and can Christopher McQuarrie just write or direct everything that Tom Cruise is in at this point? Yes, please!

While it's not quite as fun as Ghost Protocol, Rogue Nation is still a solid entry in the series and holds up with the best of them. It feels like this has been kind of a weak Summer for action, so Rogue Nation was the nice kick-in-the-pants, adrenaline boost I've been looking for. Definitely worth checking out on the big screen.