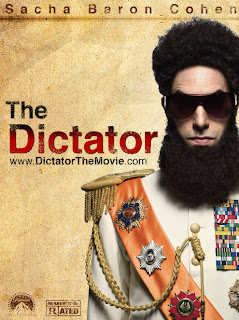 How long until Sacha Baron Cohen has his The Love Guru or his Norbit?  Or did he already have that with Bruno?

Here's a short review for a short movie.  Yeah right, I say that all the time and it never happens.

Sacha Baron Cohen plays Admiral General Aladeen, ruler of the Republic of Wadiya.  Aladeen is a mash-up of all the worst dictators you can imagine.  He's a megalomaniac, anti-semitic (a staple of Cohen movies), kills people on a whim, and is trying to develop nuclear weapons.

He comes to New York to address the UN after they threaten military intervention in Wadiya.  Immediately after arriving, he's kidnapped, stripped down to his undies, and has his beard shaved, making him virtually unrecognizable to everyone.  As he has a double that's standing in for him, nobody believes he is who he says and cannot get back into the UN.  He's helped out in by a vegan, hippie chick, played by Anna Faris, and works with her as he plots to get back into the UN.

Rather than the improvised antics with real people we've come to know from Cohen, this is largely a scripted affair.  I would imagine we're going to see a lot more of this in future from Cohen.  Now that he's much more famous, it's going to be harder to find unwitting people he can fool dressed as a character.  Anyway, as far as the story goes, it's actually a pretty standard one that's not really breaking any new ground.  I'm kind of surprised that the story wasn't a little more inspired considering the pedigree of co-writers Alec Berg, David Mandel and Jeff Schaffer, who are all writers for Seinfeld and Curb Your Enthusiasm.  Shaffer is also the co-creator and writer of The League, another favorite show of mine.

If you like messed up, politically incorrect, or inappropriate humor, then The Dictator is for you.  As you'd expect, nothing is sacred with these guys, and nobody is left unscathed.  I laughed consistently throughout the film.  However, I didn't feel there were enough intense, laugh-out-loud moments; it's more of a consistent chuckle.  Again, with people behind this movie, I didn't think it would be so hit-or-miss and was expecting a little more bite to it. There is, however, a great speech at the end that takes a shot at our current state of affairs and is the highlight of the film.

Comparing it to Cohen's other recent films, this is better than Bruno, but not in the same league as Borat.  It's hanging around in the middle of those two films.

Director Larry Charles (Borat, Bruno) did a good job of keeping things moving along.  As I mention at the beginning, The Dictator is a short movie at just 83 minutes.  It doesn't drag or feel like it's running a gag or joke into the ground.  However, with all the cameos in the film and jokes from the trailer that didn't make it into the movie, you have to assume that this movie was edited down heavily.  I would bet there's going to be an unrated cut of this once the DVD/Blu-Ray comes out.

There are so many funny cameos in the film that you lose track of them all by the end.  The supporting cast also does a good job.  Anna Faris remains cute even when they everything they can to make her look unattractive.  She plays more of a straight role here, which is a surprise considering how funny we know she's capable of being.  John C. Reilly, who's one of my favorite actors, really isn't in it very much, despite being featured in the trailer.  It's not much more than a cameo.  Ben Kingsley plays Aladeen's right hand man, also another straight man role.  The guy that really comes out of this on a high note is Jason Mantzoukas, who some of you may recognize as 'Rafi' from The League.  He's funny in every scene he's in.

If you're a fan of Sacha Baron Cohen, or inappropriate humor in general, then I think you'll like The Dictator.  While more silly than satirical, and not as strong as Borat, it's consistently funny.  As it is a shorter movie, I can't really recommend paying full price for it, but a matinee wouldn't be stretching it too much.