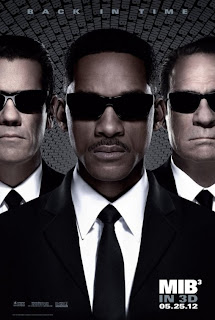 "Threequels" tend to have a pretty bad track record, especially when nearly 10 years has passed since the last film.  After the lackluster MiB 2, was anyone really demanding another?  There's a reason why it's been 10 years.  Anyway, the good news is that while not as strong as the original MiB, MiB 3 is a mostly entertaining, but flawed addition to the series.

An alien criminal, Boris the Animal, played by an unrecognizable Jermaine Clement (Flight of the Conchords), escapes a secret Lunar prison that contains the worst aliens out there.  Agent K (Tommy Lee Jones) imprisoned him back in 1969, shooting off one of his arms in the process.  Boris wants revenge, and plans to travel back in time, not only to kill Agent K, but do it before he loses his arm.  Making matters worse, killing Agent K in the past prevents him from deploying a defense grid around that Earth that would have stopped the invasion of Boris' people and led to their extinction.

Boris succeeds, but Agent J (Will Smith) is somehow able to detect the fracture in the timeline.  He also goes back in time to stop Boris and restore the original timeline.  The movie picks up once Agent J arrives in 1969.  Fortunately, the movie avoids using the 60's to make fun of the times or use a lot of lame fish-out-of-water jokes  There are a few here and there, but I felt they worked since they didn't overdo it.  It sticks more to the task at hand.

You meet the younger version of Agent O (Alice Eve), but she's really not in the movie much.  This also goes for the modern version of Agent O (Emma Thompson).  This is one of the missed opportunities of the film, as it is consistently implied that Agents K and O may have had a thing at some point, but it's never developed and it's a thread that goes nowhere.

MiB 3, starts off a little rough, with some really labored and stunted dialog.  I had heard that they went into filming without a story or script and it feels like it at first.  Speaking of dialog, Will Smith seems like he's been out of it a little too long, as much of his ad-libbed dialog seemed out of date by a decade or so.   You know, like when your Dad or Uncle tries to relate to you and uses slang that nobody says anymore?  It felt like that.  Will Smith was his typical, charismatic self otherwise.

There's a lot about MiB 3 that felt underdeveloped.  In the early parts of the film, it seems like they are going to get into K's history and his motivation a bit more, but then by the time the movie ends you realize that none of the questions that are setup in the beginning are ever answered.  You still know the same amount about the characters as you did before.

As much as I like Jermaine Clement, he wasn't given a lot to do as Boris the Animal.  He doesn't have much in the way of meaningful dialog and just speaks with a weird voice and laughs unusually.  I think he tried as hard as he could, but again, there wasn't much there.

The most inspired thing is Josh Brolin's portrayal as the young version of Agent K.  He does a spot-on impression of Tommy Lee Jones (who's also barely in the film, as if he didn't really want to be there).  The impression is so good that the first time I heard him do TLJ's voice, I thought it was a dub, rather than impression.  You really do start to forget that you're watching an actor do an impression and somehow are  looking at a younger version of Tommy Lee Jones.

Another thing I thought was really interesting was the character of Griffin (Michael Stuhlbarg), an important alien that has the ability to see the outcome of multiple timelines simultaneously.  It's a cool concept and they use it well.  He isn't introduced until almost the end of the film though, so again, it felt like something that was underused.  Bill Hader, as Andy Warhol, was also one of the funnier things about the film.

There are a lot of weird or inconsistent things in the movie.  At one point during a fight, a metal door comes off the hinges for no reason at all. You see an alien die only to the same alien alive in the very next scene.  There a bystander screaming during the same fight, only to be one of the people the MiB are fighting against.  Why are you screaming like you're helpless, but then attack later on when you lost your tactical advantage?  There are a few things during the climax that aren't consistent either.  You'll notice moments where the bad guy would win if would do something simple, but that's 'bad guy movie logic' for you.  Some of these flaws you don't really notice until after the fact, where others are totally obvious as they are happening.

Barry Sonnenfeld did a good job keeping the tone of the film light and mostly fun.  It doesn't fully capture what made the first MiB great though.  The script by Etan Cohen (Idiocracy, Tropic Thunder) is an improvement over MiB 2, but many of the jokes fall flat.  I'm surprised at all the missed opportunities here.  As mentioned earlier, you think you're going to get more character development, but it never happens.  There's a moment at the end that's thrown in to give the climax some emotional weight, but it felt forced in.

The strongest elements of the film are the overall look of the film and the effects.  The alien and creature design was excellent, but that's to be expected whenever the legend, Rick Baker, is involved.  I didn't bother to see this in 3D for a change, and I didn't feel like I missed anything.  It is a very nice looking and colorful film though.

Overall, MiB 3 is a enjoyable enough addition to the series, but as I've mentioned a few times, it seemed like there was a lot of wasted potential.  If you're a die-hard fan of the series, I think there's a lot you'll enjoy about MiB 3.  For those of you that are dying to see this or are all caught up on your movies, it's worth a matinee.  Otherwise, I'd save it for a rental.