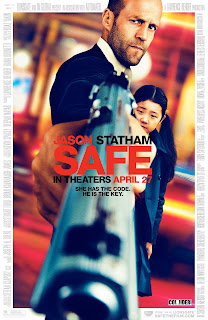 This is the type of action film I've been wanting out of Jason Statham for years.  All it took was the Russian and Chinese mafia to chase a little Chinese girl to make it happen.  Enough with this 'transporting' of hot models.

Safe stars Statham as Luke Wright, who's name will be drilled in your head after once sequence of dialog where his full name is repeated about 8,000 times in a row.  This is during a conversation between two people who both know who he is, yet have to say his full name over and over as if there might be some doubt as to whom they are talking about.  We've all figured it out by this point, have you guys?

Anyway, Statham is a cage fighter that was supposed to throw a fight, but of course he screws up and doesn't, so now the Russian mob makes him pay.  Rather than kill him, they kill his wife and threaten to kill anyone he's ever going to know.  This forces Wright becomes a bum, wandering the streets unable to have much of the way of human contact for fear of being responsible for someone's death.

Juxtaposed with Luke's story, is the story of Mei (Catherine Chan), a Chinese girl that has the mutant ability to memorize any number she's seen in an instant.  This makes her very useful to the Chinese mafia, who call themselves 'old school', because they don't use paper or computerized records.  She's basically kidnapped  by the mob, with the promise they will take care of her sick mother as long as she works for them.  The mob is all about family and stuff.  At one point she's given a very lengthy and important number, which has now made her the target of Russian mafia, who want this number too.  We aren't sure what for yet, but more will be revealed as the movie goes on.

Mei and Luke's paths cross, literally, when Luke notices Mei hiding from a group of Russian mobsters.  Even though he really had no reason to get involved (other than maybe take advantage of an opportunity to stick it to the Russians), Luke Wright leaps into action and saves the girl.  He's the former cage fighter/bum with the heart of gold, I guess.  Only, we are soon to find out that he's no ordinary cage fighter/bum.  Like The Transporter, there much more to him than meets the eye.  Oh wait, I'm thinking of The Transformers.  Why hasn't Statham been in any of the Transformer movies?  I'm getting off track again...

I have to wonder if director/writer Boaz Yakin (Remember the Titans, Uptown Girls) is a fan of old school action films. Safe has all the 80's action cliches: car chases, gun fights, fight fights, dirty cops, bad dialog, bosses with over the top accents, etc.  It's actually not a bad effort though, but I wouldn't expect any less from the writer of Dolph Lundgren's The Punisher.  The action moves along at a very fast pace and you never feel like the movie drags during its 90 minute runtime.  It also has a nice 'gotcha' at the end.  I hesitate to call it a twist, but it caught me by surprise even after I had been warned about it before seeing the movie.

As far as the action goes, it's all done well.  There's lots of nice Statham ass-kicking moments punctuated by loud punches and thuds.  There were a few too many quick-cuts with the editing during the fighting though.  This is still a pet-peeve of mine.  The other thing you'll like is that nobody really ever hesitates to act in the movie, if you think a guy is about to punch someone, don't worry, he is.  Have you ever watched an action film and wondered why the guy with the gun doesn't just shoot the other guy when he has the chance?  That happens here.  Safe is a violent film and totally-over-the-top, but it's done in an entertaining way.

It is pretty much completely a Statham vehicle, with the rest of the cast made up largely of no-names or people you may barely recognize from other small roles.  The only person I recognized was Chris Sarandon, who most of you know will know best as 'Prince Humperdinck' from The Princess Bride, and James Hong, who was 'Lo Pan' from Big Trouble in Little China.

The soundtrack by Mark Mothersbaugh helped with the nostalgic action feel.  At times sounded like it was copying Mission Impossible or Lethal Weapon.  The end credits sounded like Predator theme.  Whether that was intentional or Mothersbaugh isn't that creative I don't know.

Safe isn't breaking any new ground in the action genre.  It's actually pretty dumb, but it's dumb fun.  Even if you aren't a huge fan of Jason Statham, Safe is an entertaining action flick that you can just shut your brain off, watch and move on after.  If you are a fan of Statham, then I think you'll be pleased as this is a step up from some of his more recent efforts.  This will likely be out of the theater soon, so I wouldn't make a huge effort to see it, but if you wait a month or two and catch it on a rental, I think you'll enjoy it quite a bit.