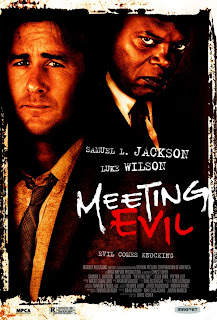 Nick Fury swaps his eye patch for a fedora and a murderous rampage.

Meeting Evil features Luke Wilson as John, a just-fired real estate agent.  To make matters worse, he's in bad shape financially and pretty miserable, snapping at his wife Joanie (Leslie Bibb) and kids for surprising him on his birthday.  Wait a second, their names are John and Joanie?  Seriously?  Oh boy...that's a double date you find an excuse to skip.

There's a knock at the door and it's Richie (Samuel L. Jackson), a stranger who's car stalled and needs a push.  Even though he's just asking for help, there's something creepy about Richie, and we all know how Richie is a name that just inspires fear.  Also, the way John is reacting to him seems unusual as well.  John is injured while pushing the car and Richie offers to take him to the hospital, which John reluctantly agrees to.

They take a detour at a bar were John runs into his mistress, Tammy (Peyton List).  John might be miserable, but I'd be pretty happy if I was sleeping with both Leslie Bibb and Peyton List.  Anyway, from there they all head off together where Richie continues to detour them, saying cryptic things that put John and Tammy on edge.  Things take a turn for the worse when Richie kills someone in front of them and becomes increasing psychotic.  Richie leads them on a murderous rampage with John essentially his hostage, even though he had multiple opportunities to escape (Tammy is able to get away) or subdue Richie.

Why is Richie killing all these people?  He's obviously a psychopath, but he makes statements about not being a bad guy, lack of common courtesy and only killing people that have given up.  You think there might be something beneath the surface of it all, but there isn't really.  Most of the killing happens off screen, and many times you aren't even aware he's killed someone until well after the fact.  The movie is largely bloodless as well, so it's very tame for a movie about murder.  As a result, you never feel any tension.

When Richie's real intentions are revealed, it's a disappointing let down with an even more disappointing climax.  Based on the premise there's so many interesting places they could have taken this film; like having John, already in a downward spiral from losing his job and marital issues, being forced by Richie to join in the murders and eventually enjoying them as he continues to break down mentally.   For most of the film, I was expecting Richie to eventually reveal himself as some kind of demon or devil in human form that just reveled in the carnage.  That wasn't the case either.

This was based on a book by Thomas Berger, which I hear was more of a character study that the movie should have been.  The screenplay by Chris Fisher, who also directed, seems to have lost any of those qualities and made this into a pretty generic thriller.  This wasn't a good effort on his part. This felt like something that could have been a TV movie.

Meeting Evil is overacted to the max with pretty bad and inconsistent dialog throughout the movie, especially from the supporting characters.  There are some exchanges that end up being unintentionally hilarious.  As mentioned earlier, there's never any real tension and the pacing of the movie really drags.  I was shocked after finishing this to see that it wasn't even 90 minutes.

I hate to pick on the guy, but what happened to Luke Wilson?  After movies like Old School and Idiocracy, I thought he's be a superstar by now, but if you take a look at his filmography, he's been in a series of terrible movies.  He really felt like he was phoning it in here, alternating between whispering his dialog and shouting it. Samuel L. Jackson, on the other hand, seemed like he was having a lot of fun playing Richie, but it's always more fun to play the mysterious bad guy.

There are many distracting things in the movie, like casting two young actors to play John and Joanie's kids that look nothing like one another, let alone look anything like their parents.  They even seemed to be different ethnicities.  As neither kid had a single line of dialog, their presence seemed completely unnecessary to the film.  Speaking of unnecessary, there were two cops that would show up from time to time that also just didn't do anything for the movie and everything they did felt very amateurish.  Lastly, Peyton List seemed wasted here as well.  Early on, she's struck by Richie and has blood on her forehead, but she never wipes it off even though hours have passed and you last see her in the police station.  Nobody attends to her injuries there?

Does these people look related to each other? 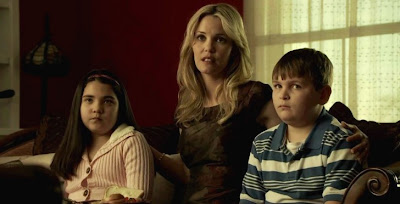 I had high hopes based on the cast, but Meeting Evil is just not a good movie.  It's overacted, over-directed and doesn't go anywhere interesting after the promising setup.  Plus, it wastes a Nicholas Cage-like performance from Samuel L. Jackson.  It's a mess and just kind of ridiculous.  This isn't something I can really recommend unless you like watching bad movies.