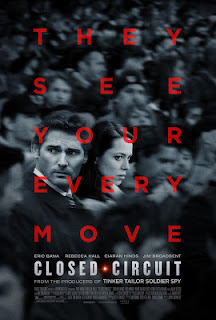 I was disappointed to find out that Closed Circuit is not the conclusion to the Short Circuit series.  I was really waiting on that.  Oh well...

A bomb goes off in a busy London market.  The police have their suspect and two lawyers, Martin Rose (Eric Bana) and Claudia Simmons-Howe (Rebecca Hall), are brought in to represent him.  Because this is a very high-profile case and there are many classified sources, two different hearings are being held to determine what evidence can be used.  Martin and Claudia are not to contact each other, and Claudia is overseen by an MI5 agent to make sure she handles all the information correctly.  Having no familiarity with British courtroom proceedings, this seemed overly elaborate and confusing.  If that's how it's done over there, then I guess I just have to go with it.

Martin and Claudia continue to investigate and realize they are being spied on.  Eventually, they learn the prime suspect may have actually been an MI5 agent, and the government is willing to do anything to cover this fact up.

As the story continues to escalate and it's clear their lives are in danger, Closed Circuit manages to have no urgency or tension.  Even as Martin and Claudia are being chased and people attempt to kill them, I never felt like they were in any real danger.  It's presented in a very dull and matter-of-fact way.  Director John Crowley might has well have been filming a documentary or something that got shown on the History Channel's off hours.

Another big issue with Closed Circuit is how dry it is.  When introduced to Martin and Claudia, we're explicitly told they had a romantic past.  This had to be told because there's absolutely no chemistry between them.  It's not just them though, everyone in the film felt like a robot: sexless, passionless, and humorless. Johnny 5 had more personality.  It's unfortunate because there were a ton of places where Steven Knight's screenplay could have been punched up to make this funny, or at least human.  I'm not saying it should have been a comedy, but you could have added humor and not lost any of the dramatic/thriller elements.  In fact, it would have made those elements have more impact because there'd be some personality to sink your teeth into, and make you care about what's going on.  Instead the focus is on all the details, and those details just aren't that interesting.

Closed Circuit is well acted though, and Rebecca Hall and Eric Bana give very workman-like performances.  Nobody stands out as weak, and everyone does their jobs, even if it felt like many were just going through the motions.  One standout was Jim Broadbent's performance.  That guy makes everything better, but he couldn't save this.

Finally, just as the film feels like it's picking up and we're getting some answers, it totally fizzles out.  I was left saying to myself, "What even happened?"  What was the film trying to say?  The government is watching you?  That they're willing to do anything to cover up something that will make them look bad?  Is that news to anyone, especially these days?

Closed Circuit is a well-acted thriller that unfortunately contains no real thrills, and is very dry and boring.  The lack of any kind of chemistry or personality makes it hard to care about anything that happens in the film.  I think I would have liked this film if it had actually been about robots.  This is a hard one to recommend, and can only advise you to save it for streaming or cable.