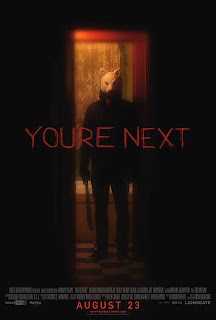 If you think You're Next is just another run-of-the-mill, home invasion thriller, then you'll be selling the film short and missing out on a nice, late-summer surprise.  I was actually going to skip this one, but after hearing some of the buzz, I decided to give it a shot.  I'm glad I did.

After a prologue where a really mismatched couple gets murdered, a wealthy, retired couple (Rob Moran and Barbara Crampton) return to their large vacation home for a family reunion.  First to arrive is their son Crispian (AJ Bowen) and his girlfriend, Erin (Sharni Vinson).  The remainder of the siblings and their significant others arrive later and eventually they sit down for dinner.

During dinner, Tariq (Ti West) notices something outside and is shot in the the head with an arrow.  The family escapes to a safer room as an unknown number of attackers continue to terrorize them.  More are injured or killed while they try to figure out how to survive and get help.  The randomness and brutality of it is a little shocking, even for horror veterans.  It's tough to watch a normal family just trying to enjoy dinner and then all hell breaks loose.  Why is this happening?  Do they somehow deserve this?

Where You're Next takes a turn for the awesome is when Erin decides she isn't just going to sit there and do nothing as they wait for help.  As if the spawn of Liam Neeson, she reveals a particular set of survival skills, and turns the tables on the attackers.  If you've ever gotten frustrated wondering why people trapped inside their house don't behave differently or use their knowledge of the home as an asset, then I think you' really love how You're Next plays out.  Recently, I was very critical of The Purge for exactly this reason.

It's very satisfying to see how You're Next flips the script, and this makes it easy to forgive many of the film's flaws.  While just 94 minutes, it still somehow takes a little too long to get going, especially when it's obvious that the murders from the prologue happen in the home next door, so you know this is coming.  I don't want to spoil too much, but some of the twists are either pretty apparent from the beginning, or you'll figure out without much effort.  The acting is also a little rough to watch.  It's usually never the strength in horror, but it really stands out here as a weakness.  The exception to this is Sharni Vinson as Erin, who establishes herself as quite the badass.  I'd even go out there can call it Ripley-esque.  Also, I have to say that Barbara Crampton still sexy as hell.  I know that has nothing to do with the acting, but I just had to put it out there.

Another thing I liked about You're Next is while gory in parts, they don't go overboard with it.  There are plenty of times where they could have, but they struck a good balance of showing you just enough, and then letting the sound effects and your imagination do the rest.  I was also surprised at how funny it was, not just from the story elements, but there's some dialog that gave me a laugh.  The humor is a good contrast to the number of jump scares.

Director Adam Wingard, along with writer Simon Barrett, are part of the team that's been involved with the V/H/S series, along with Ti West and Joe Swanberg (who have roles in You're Next).  It's clear these guys really love the genre, and I appreciate how they are willing to experiment and take risks.  I haven't always loved everything they've done so far, but at least they're making the effort.

You're Next is a genre-bending horror/thriller that has a nice mix of violence and dark humor, and is much more fun that you'd expect.  It's also a bit of wish fulfillment if you've ever been irritated with character behavior in similar films.  That alone made it worth watching, and as a result has a much broader appeal.  I definitely recommend checking it out, and it's worth a matinee.